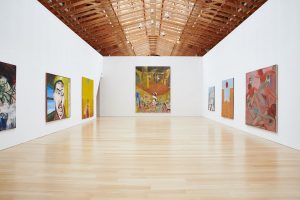 The Brant Foundation Art Study Center is pleased to announce a survey of works by Francesco Clemente, on view from November 12, 2018 through March 2019. The exhibition brings together a concise but comprehensive selection spanning 40 years of the artist’s work including self-portraits and portraits, works on paper, frescoes, monumental oil and watercolor paintings, and one of the artist’s notable hand painted tents. Executed in Rome, New York, Taos, Varanasi, Jodhpur, Orissa, Pondicherry, and Madras, the works have traveled far and been dispersed among museum collections and art patrons. They now come together for Francesco Clemente: Works 1978–2018, each with its own story to tell. Non-chronological in nature, the exhibition interweaves threads that have been a constant in Clemente’s long-spanning oeuvre, and presents ideas and questions that persist throughout his various transformations in medium.

“Ideas divide, forms unite. In the search for form painters encounter beauty. If they are lucky,” says Clemente.

The Italian-born artist educated himself in the library of the Theosophical Society in Chennai (formerly Madras), India, where he studied Sanskrit and became acquainted with Hindu and Buddhist literature. Fascinated by the local culture and craftsmanship, he learned from and worked together with Indian papermakers, miniature painters, and sign painters.

During this time, Clemente created hundreds of works on paper in various sizes, and established his practice of working in series. One such series included in this exhibition is the Pondicherry Pastels (1979– 80), a group of 82 small works on paper depicting his daily life in the Sri Aurobindo Ashram. The exhibition will also feature Clemente’s definitive series, The Red Book (1989), created during the artist’s time in Orissa during this period. The series comprises 18 watercolors on handmade paper, celebrating the permanence of female power Clemente witnessed in the Indian and Tantric traditions.

Throughout his life, Clemente has returned to the theme of self-portraiture. The artist has portrayed himself as an ageless presence, at times twisted in difficult and improbable positions, at others seated peacefully in contemplation. Rejecting a psychological reading of his self-portraits, Clemente sees them as a meditation on the Buddhist view of the self as “continuity of discontinuity.” Francesco Clemente: Works 1978–2018 will include Self Portrait with Bird (1980) alongside portraits of Clemente’s artist and poet friends.

His most recent work includes a series of paintings on canvas (2015-16) featuring hearts and white flags, two of which are included in the exhibition. In one, Clemente embraces the white flag as a symbol of surrender as it pierces a striking image of a heart being picked apart, or maybe being restored to its integrity, by a flock of sparrows. In the second, a white flag rises from a sinking boat filled with hearts and surrounded by more boats carrying children’s toys, a Noah’s ark of innocence and love lost.

In addition to the recent flag works, The Brant Foundation will install a 12-foot by 18-foot tent made in 2013, fabricated in India by local tentmakers, with the inside walls and ceiling painted by Clemente. Each of Clemente’s tents is an inhabitable painting, which may be entered and experienced in the way of a contemporary chapel.

The tent on view will be surrounded by 15 of the artist’s recent watercolors painted in collaboration with miniature painters in Jodhpur. One set evokes a narrative of creation and origin in the form of an abstract, primeval egg surrounded by people, angels, animals, forests and cities painted in gold on blue in traditional miniature styles. Another set features a recurring image of a theater stage, red and pink curtains framing scenarios of fragility, chaos and loss, depicted in sensual and fluid colors.

Born in Naples in 1952, Francesco Clemente playfully says that he belongs to the last generation to fight the notion that capitalism is inevitable. Like many of his generation, he sympathized for those fighting the political and class system of 1970s Italy. At that time, Arte Povera was coming into prominence as a movement that stood against the institutional status quo, favoring conceptual strategies and the use of found objects and industrial materials over painting, which it considered to be obsolete.

Francesco Clemente met Joseph Beuys, who lived in Dusseldorf, in 1971, and observed and admired Cy Twombly, who lived in Rome, from afar. Schooled by Arte Povera artists like Mario Merz and Jannis Kounellis, Clemente became close to friend and mentor Alighiero Boetti in 1973. Together they traveled to Afghanistan, where Clemente was inspired by Boetti’s mode of working with local artisans and craftspeople. Clemente was drawn to the Eastern way of life, and he soon sought creative refuge and spiritual realization in India, moving there with his wife, Alba, a well-known theater actress whom he had met in Rome, in 1974.

In 1980, Clemente traveled to New York for his exhibition at Sperone Westwater Fischer gallery. Soon after, with Alba and their two daughters, he established a studio on a then deserted street in downtown Manhattan, where he works to this day. New York City in the 1980s proved to have a profound impact on Clemente’s artistic life. He collaborated with and befriended a wide range of dancers, poets, and painters in the city’s thriving art and literary scene. He worked on a series of collaborative paintings with Andy Warhol and Jean-Michel Basquiat, and created illuminated manuscripts with poets Allen Ginsberg, Robert Creeley, John Wieners, and Rene Ricard. He had met the poets, idols of his teenage years, through Raymond Foye, with whom he later published the Hanuman Books.

In the early years of the decade, he was considered a part of the Transavanguardia movement in Italy, and its American equivalent, Neo-Expressionism, in New York. Artists like Julian Schnabel, Anselm Kiefer, Enzo Cucchi, and Jean-Michel Basquiat were known for a “return to figuration,” moving away from the minimalist and conceptual modes dominant at the time, in exchange for painting and expressive symbolic imagery.

Clemente chronicled the many fascinating personalities he met during this time through portraiture, achieving the distinctive style for which he became well recognized. The popularity of his portraits led to his participation in the 1998 film Great Expectations, directed by Alfonso Cuarón, for which he created more than 100 works on paper and portraits on canvas that were a critical element in the storyline. The following year, Clemente had a major retrospective at the Solomon R. Guggenheim Museum, New York, which traveled to the Guggenheim Museum Bilbao in 2000.

Today, Clemente is reluctant to be linked to any specific movement, and though he credits his development to his relationships with many artists, he views himself as a nomadic artist. He is fascinated by the continuous exchange between the East and West, particularly between India and America, which goes as far back as the nineteenth century, when Ralph Waldo Emerson and Henry David Thoreau read the Bhagavad Gita.

Clemente delights in depicting the grotesque as sublime, and the sublime as grotesque. The two values are interchangeable in his visual language: his graphic depictions of sexuality, violence, explicit male and female figures, and bodily functions are executed vividly, without judgment, and in a spirit of celebration. These depictions are intended to witness the essential harmony and the transcendent nature of reality, a testament to Clemente’s assertion that to the eye of a painter, the world is perfect.