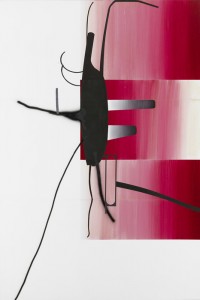 With about 150 works from the Brandhorst Collection, Schiff Ahoy focuses on the continued relevance that the art of the 1960s and 1970s holds for contemporary art production. During this period, artists such as Carl Andre, Joseph Beuys, James Lee Byars, Andre Cadere, Mario Merz, Ed Ruscha, Niele Toroni, Richard Tuttle, and Lawrence Weiner experimented with materials and production methods previously considered unworthy of art. They called into question the static and work-based character of modern art, vigorously addressed the role of the viewer, and engaged with alternative artistic formats and channels of distribution. These impulses continue to be provocative and fruitful today, revealing numerous points of connection between the collection’s holdings dating from 1958 to the present.

The works on display share an interest in activating historical and art-historical interconnections. The artwork which lends the exhibition its title, Schiff Ahoy—Tied to Apron Strings (1989) by Lawrence Weiner is a prime example. The 13-piece collage series is based on pages taken from the book Die Siegesfahrt der Bremen (1940). Written in a heroic and patriotic tone, the book chronicles the daily experiences of a captain. Shortly before the outbreak of World War II, Commodore Ahrens sailed Norddeutscher Lloyd’s high-speed steamer “Bremen” from the US to the ship’s National Socialist homeland, and thus into a fatal future, which ended with the emergence of a new world order in 1945. Returning to this book in the historically significant year of 1989, Weiner juxtaposes two vital turning points in the history of the 20th century, and dismantles the hegemonic efforts of ideological systems that, he implies, were “tied to apron strings.”

In Schiff Ahoy, a special focus is placed on recent acquisitions of the past two years, most of which are presented to the public for the first time. With works by Kerstin Brätsch, Paul Chan, Jacqueline Humphries, Louise Lawler, Mark Leckey, Seth Price, Josh Smith, R.H. Quaytman, Kelley Walker,and Heimo Zobernig, Schiff Ahoy marks the expansion of the museum’s collection to include current artistic production. This emphasis will be continued in the coming year with solo exhibitions by Wade Guyton, Kerstin Brätsch and Seth Price, and occurs within the context of the museum’s own collection history, which has grown since the 1970s with the art of its time.