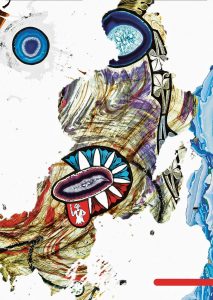 This is the first survey exhibition of the Hamburg-born and New York-based painter Kerstin Brätsch. In her work, the influences of the digital age are coupled, in a unique manner, with a reflection on art-historical traditions. Her complex and consistent work oscillates between a conceptual analysis of painting and a devotion to painterly processes. A notable feature of Brätsch’s art is its openness to a wide range of media and points of reference. Brätsch both reflects pop cultural and technological influences and revives archaic craft techniques.

Given the exuberant proliferation of digital images, continued faith in painting may seem almost anachronistic—particularly with respect to certain aspects associated with it: the assumption of authentic and direct artistic expression and the desire to seek out an identifiable artistic subject. Against this backdrop, Brätsch proposes targeted “detours” that invite us to embark on a nuanced critical engagement with precisely these questions. She creates portraits that represent no one particular person, but are instead based upon projections of personality (created after visits to psychics). She isolates the brushstroke—the classical signifier of the artist’s “hand”—and enlarges it, allowing it to pass through a variety of series and media, like a reproducible “sample”. Or she collaborates with craftsmen, drawing upon their skills and knowledge to expand her own artistic range.

Featuring over 100 works from 2006 to the present day, the exhibition offers for the first time a comprehensive insight into her work, which not only encompasses oil paintings on paper and Mylar film, but also marblings, glass works, and (as collaborations with fellow artists) slide-projection series, installations, and performances. Kerstin Brätsch does not consider her works to be isolated, static artworks, but as objects of exchange and interaction. This is also reflected in her numerous collaborations. Thus, alongside works by Kerstin Brätsch, the exhibition also features contributions by and with DAS INSTITUT (with Adele Röder), Full-Fall (Mattia Ruffolo and Davide Stucchi), Gaylen Gerber, Jane Jo, Allison Katz, Alexander Kluge, KAYA (with Debo Eilers), Kathrin Sonntag, and UNITED BROTHERS (Ei and Tomoo Arakawa).

The title, Innovation, is derived from an advertising slogan from the compressor company Brätsch in Hamburg. It seems to perfectly describe the expectations of a first survey exhibition: the pressure to prove one’s self and to continuously put out new works and ideas. One of Brätsch’s strengths is her ability to expose these types of mechanisms and expectations with great humour and clarity.