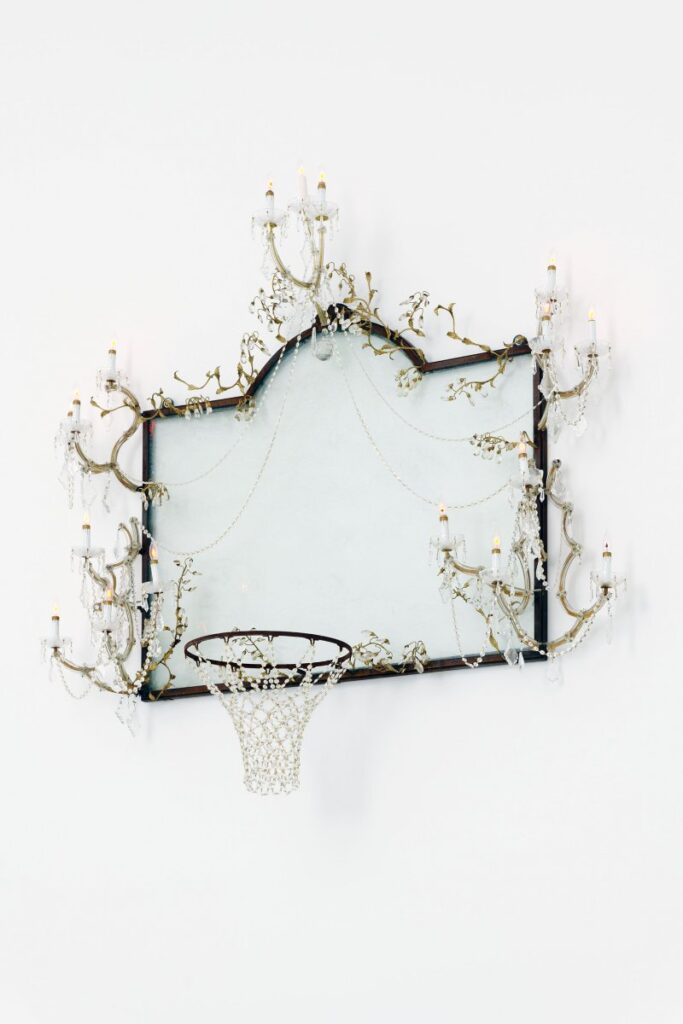 A major artist of our time and a radical figure, African-American artist David Hammons has, because of his critical strategy and avoidance of the art world, hardly ever been presented in Europe in any meaningful way. This corpus brings together nearly thirty pieces, more than half of which have never been shown in previous exhibitions of the Collection, and features works on paper from the late 1960s and early 1970s to more recent installations.

Beginning with a masterful piece, the lacerated American flag in the colours of the Pan-African flag, entitled Oh say can you see (2017), the show concludes with a unique installation called Minimum Security (2007), which constitutes the highlight of the exhibition. The first work responds to the folkloristic and colonial vision of the painted decor that adorns the dome, evoking slavery in the section depicting North America and decorated with a dazzling yet incomplete American flag. The second piece is housed in the old Hall of Lost Steps, at the end of the exhibition route, where it generates a particular tension with the restored remains of the original decor: the metal cage with the dimensions of a prison cell responds to the map of the world from the late 19th century, showing the trade routes used at the height of the West’s colonial expansion. The exhibition also comprises pieces that were highlights of shows at the Palazzo Grassi and Punta della Dogana, such as High Level of Cats (1998) and Central Park West (1990).

If David Hammons plays with a palette, it is with a subtle colour chart of gestures: appropriations, assemblages, performances, and paintings made from prints of bodies and objects. Born in 1943 in Illinois, since the 1970s, David Hammons has developed a furtive and subversive work, haunted by the nagging wound of ordinary racism. The artist moved to New York in 1975, to Harlem, a district that became the epicentre of a creation crossed by struggle and socio-political activism.

Influenced by Arte Povera during his stay at the American Academy in Rome in 1989, Hammons, a master of precarious assemblages, recycles objects, gleaned from his wanderings, into powerful sculptures, rooted in the everyday. These finds, worthless pieces of bric-a-brac, wanderings, and political protests, all shine a harsh light on the misery of Harlem, stripped of its original culture—jazz—by consumer society. This activism, exploring collective memory in a dissenting mode, permeates his work. Thanks to his habit of strolling through the city, the artist borrows elements, from real life and from the street, imbued with a strong emblematic charge: dirty objects and waste items are invested with a new meaning. David Hammons stages them in the pure and conceptual white universe of the exhibition space. Their meaning is elucidated by reading their titles, based on poetic shifts and puns.

Passionate about jazz, by the question of musical composition and improvisation, the artist evokes, in this way, his position within the world of art: “It’s like being white in the world of jazz, like Chet Baker or Gerry Mulligan. They had confidence. I feed on the confidence of jazz greats like them.” Attentive to the tiniest details, Hammons defends the creative wealth that comes from poverty: “if you’re in poverty and enjoy it and can laugh at it, then you have no allegiance to anything and you’re pretty much free.”