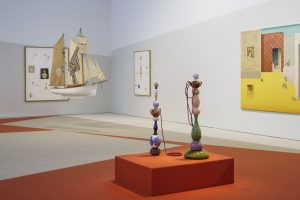 Bonniers Konsthall has open the 2018 spring season with the most comprehensive solo exhibition of artist Jens Fänge to date. Fänge works with painting and assemblage and has occupied a central position in the Swedish art scene for quite some time. Recently his work has also received international attention. Drömmarna (The Dreams) focuses on his more recent production, characterised by the artist’s inclination to allow the paintings to extend beyond the canvas and into the room. Specifically for this exhibition Jens Fänge has created a new series of artworks that challenge and play with the architecture of Bonniers Konsthall. The exhibition also includes a number of earlier pieces, the oldest dating back to 1996.

When Jens Fänge first arrived on the scene in the mid 1990s, he did so with paintings populated by surrealistic imagery, often referencing popular culture and pop art. More recently Fänge has employed media other than painting, delving into the realm of assemblage, in which he utilises textiles, paint, wood, and found objects to interfer with the room. Wallpaper with references to murals creates backdrops onto which the works and sometimes found objects are placed. A shifting image world emerges, with the artworks entering and exiting one another.

“When I painted on canvas, I often taped small drawings directly onto the background to try out various compositions. I cut out figures in Masonite and glued them to the paintings. Eventually the work continued outside the confines of the canvas. Rather seamlessly, the same idea or method could extend out into the entire room, with the walls serving as the backdrop. The original one-dimensional paintings suddenly became parts of a larger picture.” –Jens Fänge

Fänge’s paintings often depict a dreamlike or frozen moment in time, where all activity appears to have suddenly stopped. The dreamlike essence is fortified as figures and objects reappear and evolve. A series may present us with a certain character in the same position in various contexts. Or the same geometric pattern represented in different materials, thus creating a deliberate shift in the object’s meaning and function. We walk away from Fänge’s art with clues, a sense that something has happened, yet are granted no clear answer of what that something was.

Drömmarna (The Dreams) challenges the viewer’s relationship to scale and perspective through Fänge’s way of alternating between small and large gestures. His monumental new work Theme for Shared Rooms (2018), a 15-meter-long section of wallpaper, like a mural, can also be seen from outside the Konsthall, making it possible for passers-by to glimpse into his world, with it’s added layer of the gallery visitors as part of the piece.

Publication
An extensive publication about Jens Fänge has been produced in conjunction with the exhibition, including a text by art critic Martin Herbert, an introduction by curator Magnus af Petersens and a conversation between the artist and co-curator Caroline Elgh Klingborg. Drömmarna is a richly illustrated book that comprises both newly produced work and early key paintings. The book is published by Art & Theory Publishing.

“All of this does what art at its best does, which is to convince you to look at it, to trust the artist, before you’ve even absorbed the details.” –Martin Herbert