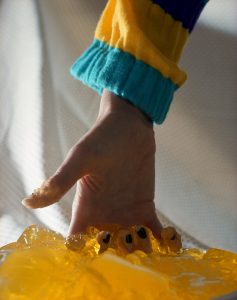 MaP: Many of your photographs seem to be as much about tactility as visuality. There are many fluids, sticky substances and hands with fingertips, touching, feeling, as if trying to know the reality of something which for us viewers is an image. Can photographs build bridges between the senses?

TR: I don’t see why not! In order to move on from the limitations of endless subjectivity, critical postmodern art reduced complex phenomena to a study of cultural form’s and language. Everything became political. With this analysis as a starting point, I’m taking a more integral or inclusive stance. I’m not only interested in how images are being read but also in their magic and how they make us feel, how they move us. Even though photography often starts as observation, my dream is a more immersive engagement. I’m an observer longing for intimacy. But to return to your question: even without synaesthesia, the five senses are interconnected and linked together from birth.

MaP: Yes, the images are both touching and about touching. Is there a conflict you set in motion, between the directness of touch, of being touched and the awareness of this—a distance to the emotion?

TR: I think I want you to sense a conflict while experiencing a photograph overcoming that conflict – at least in most pictures, not all. Opposites need each other, but what is the outcome of a conflicted union? Hopefully, something layered and therefore true. Yes, there is a balance between distance and immersion or emotionality. For me the movement is towards emotionality, but this is largely based on personality and may play out differently for other viewers.

MaP: The new works that form the major part of the exhibition Fifth Honeymoon circle around the theme of marriage, or perhaps romance, travel, rituals. A ritual is something repeated, it is invested with symbolic meaning but what that meaning is, is often forgotten or confused. The photographs in this series are not clearly illustrative of the subject—can you describe your approach to the subject—or the relation between the title and the works in the exhibition?

TR: The title was helpful in the final editing process—when deciding what to exclude—but it wasn’t there before the pictures. I typically don’t predetermine themes, ideas or symbols. They either arise from the material or they don’t. I’m not a conceptual artist in that regard but I do like a title that’s open to different readings. Apart from the conflicted unions, we’ve touched upon and the aspects you mention, Fifth Honeymoon can make you think of sticky substances added onto a series of classical forms. I think it also points to something that’s been around the block a few times. It’s time to treat photography as an old medium.