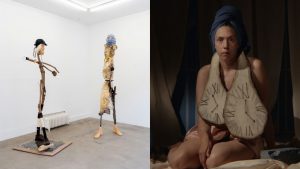 Olof Marsja and Iris Smeds are the recipients of the 2019 Maria Bonnier Dahlin Foundation grant. The foundation was established by Jeanette Bonnier in 1985, in memory of her daughter Maria, who lost her life in a car accident at the age of 20. Since its inception, the foundation has awarded grants to young Swedish artists to support them in their work.

“With a sense of humour and immense gravity, Olof Marsja allows different materials and shapes to meet in ambivalent, abrasive constellations. Much like a trickster, he eludes categories such as visual art, handicraft, traditional and contemporary. In his installations – where reindeer horn meets blown glass – he creates his own sculptural vocabulary from which new conversations and stories emerge. With roots in Sami expressions, Olof Marsja presents other perspectives and broadens the Swedish art scene. Playfully and intelligently exploring and expressing topics such as identity, contemporary and history.”

“The power and magnitude of Iris Smeds does not have to do with her credibility as a unique, young and promising artistic talent – quite the opposite. Over the past 10 years, she has occupied a borderline realm in the arts, moving between performance, writing, theatre, film and set design, giving form to the partial burn-outs, the mediocre and the second-rate misfits. Her surrealistic imagery radically questions just how we construct the world around ourselves and the deeply absurd in human existence. With her artistic repertoire, which follows its own rhythm, Iris Smeds convinces us of art’s capacity for resilience and resistance.”