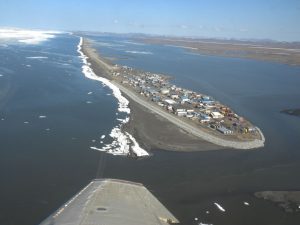 Bonniers Konsthall has begun a long collaboration with Cooking Sections (Daniel Fernández Pascual and Alon Schwabe) that will go on until the fall of 2021. The duo works with installations, performance art, and video, and examines the overlapping boundaries between visual art, architecture, and geopolitics. They often combine art and cooking in order to explore how people can eat in a time marked by climate change.

The film Kivalina, The Coming Storm is rooted in a research project that Cooking Sections conducted on Kivalina, an island off the northwest coast of Alaska. Cooking Sections was invited to work together with the local population to look at alternative ways
of approaching the question of how climate change impacts the island and its inhabitants. Through interviews with residents, environmental researchers, and elected officials, they model forth an image of Kivalina and the challenges the island is confronting.

In the film, a stationary camera takes in Kivalina’s coast as waves strike the shore. In recent years, global warming has delayed the formation of sea ice, which has meant that during the fall season the island is battered by great sea storms. The sound in the film comprises voices telling Kivalina’s history, present, and future. Kivalina is home to about four hundred people who belong to the Native Alaskan Iñupiaq people. Many of the island’s inhabitants say the landscape has changed and they are worried they will be forced to leave the place for good if the changes continue.

Kivalina has historically been used by the Iñupiaq as a temporary camp site during the summer months. In 1905, during the American colonial administration, a school was constructed on the island. The authorities made school attendance compulsory and threatened local parents who failed to enroll their children with prison. The Native Alaskans were thereby forced to settle permanently on the island, making their traditional migratory way of life impossible. From having been able to move freely in an open landscape, they now would be limited to a stationary lifestyle that was diametrically opposed to their ancient culture.

As a result of the colonial repression to which the inhabitants of Kivalina were subjected, the island lacks basic infrastructure, a problem that has been exacerbated by the erosion and flooding that have plagued the island in recent years. As a consequence, the inhabitants decided to sue the twenty-four largest oil and gas companies working in the Arctic region, whose greenhouse gas emissions they say have caused many of the problems facing Kivalina today. The suit failed, and the film Kivalina, The Coming Storm is an attempt to collaborate with the inhabitants of the island to create a new and alternative platform for action.

The work is produced by Cooking Sections in collaboration with Andrea Bagnato, Helene Kazan and Hannah Meszaros Martin.