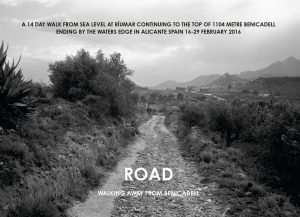 The private foundation Per Amor a l’Art presents Walking on the Iberian Peninsula at Bombas Gens Centre d’Art (Valencia, Spain), a solo exhibition by Hamish Fulton (London, 1946) curated by Nuria Enguita. It is s a selection of work based on several walks through the Iberian Peninsula, with a special focus on the walk from Riumar to Alicante, skirting Mount Benicadell (a mythical mountain within the Valencian Community), made in February of 2016.

Between 1979 and 2016, Fulton made 16 walks in the Iberian Peninsula, through continental Spain, the Canary Islands and Portugal. Generally speaking, these were solo walks, though on occasion he had company. From his first experiences of this kind he developed an interest in the rhythms of nature, and he connected physical and spiritual aspects. This relationship gives rise to an ethic and an aesthetics of walking. In the words of Nuria Enguita, curator of the exhibition, “His walks are part of an ecology, they follow a plan which is often determined by the moon cycles and the paths made by thousands of previous lives, and by the acknowledgment of the land struggles of many communities. These walks are also made under the precise prescript that only his footsteps will be left behind, that nothing will be added or taken away. ‘Not leaving any trace,’ as he puts it.”

The central theme of this exhibition is the walk through the Benicadell, a proposal suggested by Vicente Todolí as advisor to the Per Amor a l’Art and Inelcom collections. The show brings a selection of work done during this and other walks, or based on them, including photographs, drawings and sculptures. The images are complemented by Hamish Fulton’s words, reflected in a series of large-format texts written on the wall as mural paintings. Some of these texts have been written specifically for the Bombas Gens Centre d’Art exhibition and they show—without portraying—the course and duration of his walks. The words and numbers in these texts appear essentially as traces of the experience, or as details of the landscape, allowing the viewer to imagine and to traverse it.

Fulton is an example of the possibilities of art as a space for visual and conceptual experimentation. Early on, while still a sculpture student in London, Fulton decided to make walking into his art. This practice falls within the various art developments of the 1960s, which imply a break from the previous evolution in terms of the dematerialization of art and the overcoming of form, medium and genre, giving way to experience, thought and action as artistic resources.

On the occasion of this exhibition, Fundació Per Amor a l’Art has issued a publication which includes texts by Hamish Fulton, Mariano de Santa Ana, and Nuria Enguita.

Exhibition in collaboration with the Colección INELCOM Arte Contemporáneo, Madrid, and espaivisor.