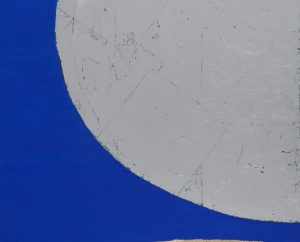 Anna-Eva Bergman (1909-1987) is a Norwegian artist who considers the “rhythm” such a painting essential structural element, a rhythm resulting from the use of certain materials -metal sheets, gold leaf, silver or copper- forms, lines and colours. Her work undergoes a radical turn from the 50s, when she focuses on pictorial abstraction. The landscape then becomes the essential reference of her work: natural motifs, Scandinavian mythology -stones, planets, mountains, boats- or Norwegian light. Her relationship with Spain began in 1933, when she settled for a year in Menorca with her partner, Hans Hartung. The trip to Andalusia in 1962 will be, however, the most decisive for her work: there she begins to elaborate her first horizons, a motif that she will resume when contacting with the Norwegian landscapes. This link between Norway and Spain -north and south- leads to a similar formality between both landscapes, which acquire, on the other hand, very different tonalities. The stone motifs it is also fundamental in the artist, which began to develop in 1951 on her trip to Norway and took over in the early seventies to travel the interior of the peninsula, as testified by her series “Stones of Castile”.