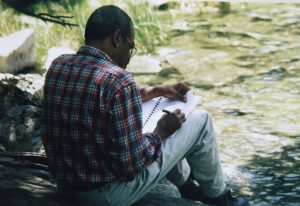 In our current moment, there is much to remind one of the international debates swirling around cosmopolitanism at the beginning of the 20th century. This is not the first historical phase of globalization but the third or fourth; presumably, however, it is one of globalization’s more extreme and violent phases. Today, homogenizing forces are leading to extinctions, both through environmental degradation and the disappearance of cultural phenomena. Yet, to refuse these forces is to risk returning to dangerous forms of neo-localism and neo-nationalism. Returning to Édouard Glissant as a key creative thinker of our time, the exhibition proposes the urgent importance of his concept of mondialité: a global dialogue that, as opposed to globalization, starts from local difference rather than erasing it. Within Glissant’s philosophical development, mondialité, like its antecedents the chaos-monde and the tout-monde, furthers the attempt to think of a relation as a constitutive aspect of the community.

The exhibitionMondialité will feature visual artworks and environments, documentary film and songs, dramaturgical structures and archival material. The exhibition also assembles parts of Glissant’s own unrealized project, the Musée du Tout-Monde. Building on the experimental exhibitions Solaris Chronicles and A stroll through a fun palace, curated by Hans Ulrich Obrist with dramaturges co-created by Asad Raza, Mondialité aims to bring visitors into contact with the terrain of Glissant’s thought and its relational form of perceiving and thinking. It takes place at a site with multiple histories, the Villa Empain. An Art Deco manse built in 1932 by Louis Empain, and occupied by German forces during WWII, the Villa served as a Soviet embassy in the 1960s, a television station in the 1980s, and a squat that hosted a Mike Kelley show in the 1990s, before being transformed into a center for art and dialogue between East and West, as home to the Boghossian Foundation. Mondialité is realized with the support of the Institut du Tout-Monde.