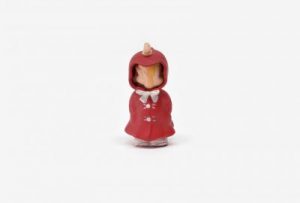 Since the beginning of her career in the late 1970s, Roni Horn, who was born in New York in 1955, has worked with visually and materially diverse media: she creates drawings, photographs, texts, artists’ books and sculptures. There are themes that recur in many of Horn’s works. They primarily include the mutability and multiplicity of identity as well as the capacity of art to recognize the divergence between the essence of a thing and its visual appearance. The deliberate, playful use of language and text always plays an important role in Horn’s oeuvre.

The Selected Gifts, 1974-2015, which is made up of 67 separate photographs, will be publicly exhibited for the first time from June 11, 2016. As the title itself indicates, the objects photographed are gifts that Roni Horn has received over the past forty years, more or less since the beginning of her career. They include books, a love letter, drawings and photographs by friends, the petrified egg of a dinosaur, a stuffed swan. The significance, history and material value of these objects are hard to determine. These extremely diverse objects are recorded photographically with an “objective” gaze and printed in one of five formats of the same height (33 x 33, 35.6, 40.6, 45.7 or 48.3 cm). With a few exceptions all objects are reproduced actual size. The photographs of the selected gifts have a documentary function. At the same time – particularly when seen as a group – they constitute a possible portrait of the artist, as mirrored in the gift givers choice.

The exhibition Roni Horn, which will run as from October 2, 2016 alongside the presentation of The Selected Gifts, 1974-2015, will bring together selected groups of works, some of them new, that include the drawings and sculptural oeuvre of Roni Horn. The exhibition is the result of close cooperation between the artist and Theodora Vischer, Senior Curator of the Fondation Beyeler, and is being especially designed for the Fondation Beyeler’s exhibition space.