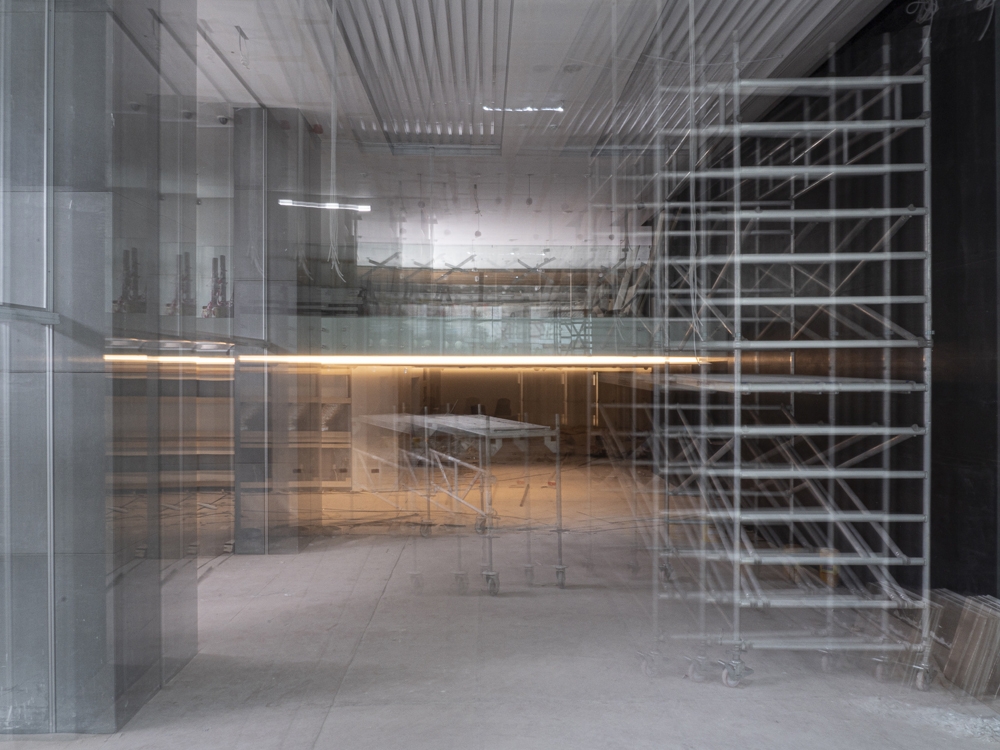 This photographic tribute is a retrospective of memories and a journey through the time it took for this life’s work, honoured in the name of its founders, Basil and Elize Goulandris, to become a reality.

Distinguished artist of the lens Christophoros Doulgeris, a sensitive practitioner of the art of photography and connoisseur of its international and historic dimension, recorded the evolutionary course of the construction of the project with the genius of his visual sharpness, by using his penetrating and perceptive gaze, the appropriate handling of the diaphragmatic function of his camera, and fidelity to the principles that define this high art, which has rightly sought and found the place it deserves on museum walls.

The photographic excerpts that record the various phases of construction and are offered for viewing are innovative and direct. They are exciting, surprising and startling. They do away with time, clear the thoughts and offer the snapshot a purely visual substance.

We would like to believe that each visitor-viewer’s walk through these pictures will be a passage of aesthetic pleasure. For us, the organisational bodies, project managers, architects, engineers, technicians and all those who, in one way or another, were involved in the realisation of this difficult and taxing project, it will be an emotional journey, similar to the one that inspired and encouraged the gaze of the photographic lens to patiently record it

The exhibition will be open to the public from October 4th to November 30th.

A Museum “in the Making”: Behind the Scenes with Christophoros Doulgeris

After Christophoros Doulgeris captured mute moments of transience and decay with his School Project in 2014, for which he documented numerous abandoned school buildings throughout Greece, and his T-Factory project in 2018, for which he shot a number of images of dust-covered, decommissioned machines in a defunct tomato processing factory in Santorini which has now been converted to an industrial museum, the Greek photographer with a second home in the art capital of Dusseldorf has now turned in the opposite direction so to speak. With his photographic documentation of the construction of the new Goulandris Museum of Contemporary Art in Athens, which opened its doors one year ago in October 2019, Doulgeris presents a new museum building in the making. The museum, housed in a neoclassical mansion from the 1920s with a new, eleven storey extension, is home to the exceptional collection of modern and contemporary art brought together by Vassilis ‘Basil’ Goulandris and his wife Elise Goulandris, who sadly passed away – Basil in 1994, Elise in 2000 – decades before their dream for the establishment of a center for the arts and culture became a reality.

With all his projects, Doulgeris proves to be a talented and highly imaginative storyteller, for his photographs go far beyond mere documentation or conventional architectural photography and enter into the realm of contemporary narrative art. Often compared with the objective photographs of the Dusseldorf School around Andreas Gursky, Thomas Struth, and Candida Höfer, the photos shot by Doulgeris of the museum building under construction are anything but sober and objective. They tell a fascinating story and can perhaps be read as a kind of biography of the inner life and structural development of a new museum building. For with Doulgeris, the “museum in the making” indeed takes on a life of its own. Construction workers become midwives of sorts, who assist in the birth of a new entity, which has already assumed its rightful place as a major landmark within the art landscape of Athens and Greece as a whole.

Through the keen eyes of Christophoros Doulgeris, we accompany the building process step by step. Bundles of orange, white, or purple cables dangle from open ceilings like the long golden hair of Rapunzel hanging from her fairytale prison tower, waited to be climbed by her Prince Charming who sets out to rescue her. In another image, a ventilation shaft winds its way upward behind a metal grid, calling to mind an enormous, slithering python in its caged, artificial habitat of a modern urban zoo. Beams of radiant light shine through openings in the outer walls, illuminating expansive spaces as though they were a theatrical stage waiting for the main protagonists —in this case the works of art from the Goulandris Collection— to tell their fascinating tales. Doulgeris is, however, not interested here in the works of art themselves, but rather in the making of the stage on which they will later perform. We, the audience, become privy to behind-the-scene situations otherwise hidden from public view. Strolling together with the photographer through the unfinished building, we witness how the chaotic situation of a construction site is slowly but surely transformed into a series of clean and orderly white cubes, ideal for the presentation of avant-garde art from the likes of, among others, Vincent van Gogh, Pablo Picasso, Francis Bacon, Jackson Pollock and Roy Lichtenstein, to name but a few.

At the same time, many images appear to be on the threshold of abstraction. As in the paintings and sculptures of the Russian Constructivists, we encounter pure geometric forms and diagonal lines that reveal an inherent dynamism. In these more formalist images, our eyes are guided and directed by horizontal and vertical, angular and curved lines of the inner life of walls that will soon be covered, forever hidden from view.

When we now stroll through the finished building to view the well-composed photographs by Christophoros Doulgeris on the pristine walls of a museum now celebrating its first birthday, we stand in awe at the magic of the transformation from chaotic construction site to state-of-the-art cultural institution. The, at times, stressful moment of formation, generally gladly forgotten once a new building is officially inaugurated, is captured for all eternity as testimony to all that goes on behind the scenes of a major private collection gone public. While Basil and Elise Goulandris have gifted us with their exceptional private collection, Christophoros Doulgeris has captured a moment of transformation, of metamorphosis that reveals all the more the great dedication and commitment of the patrons, who now invite us as the public to share in their private passion.