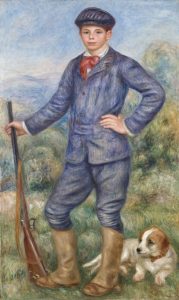 Pierre-Auguste Renoir. Jean as a Huntsman, 1910.

Exploring the works of acclaimed director Jean Renoir and the influence of his father, Pierre-Auguste Renoir, on his art and life.

Orson Welles described filmmaker Jean Renoir (1894–1979), son of renowned impressionist painter Pierre-Auguste Renoir, as “the greatest of all directors.” This exhibition aims to retrace chapters of Jean’s productions through the course of a rich and fascinating dialogue between father and son. If Pierre-Auguste Renoir’s artistic practice and creative universe influenced Jean’s art, Jean’s films shed light on his father’s paintings. 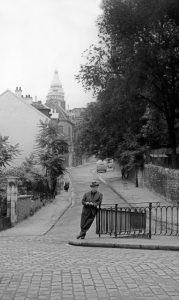 Focusing on core themes in Jean’s works, such as his vision and re-creation of Paris, the exhibition examines his path to becoming a prominent international filmmaker, bringing together paintings, drawings, films, costumes, and photos—as well as the ceramics he made before he turned to cinema. The Barnes, with its collection of Jean Renoir pottery in addition to 181 works by Pierre-Auguste Renoir, provides a poignant setting for exploring this complex, fruitful relationship between painting and cinema.

Pierre-Auguste Renoir. Jean as a Huntsman, 1910. Los Angeles County Museum of Art. Gift through the generosity of the late Mr. Jean Renoir and Madame Dido Renoir