Barnes Foundation” From Today, Painting is Dead- Early Photography in Britain and France” 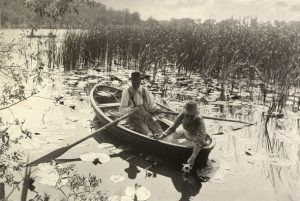 On first seeing a photograph around 1840, the influential French painter Paul Delaroche proclaimed, “From today, painting is dead!” The story sounds far-fetched, but it captures the anxieties that surrounded the technology when it first emerged in the mid-19th century.

At the time of photography’s invention, painting was (and had long been) the primary medium for recording images. The art establishment had rigid guidelines for style and an official hierarchy of subject matter: First came history paintings, which sought to impart moral messages. Portraiture was next. Then came scenes of daily life or genre paintings. Landscape and still life ranked lower still.

The nearly 250 iconic pictures in this exhibition are organized by these official categories, illuminating the possibilities and challenges that amateur and professional photographers faced while experimenting with their new medium. In each section, you’ll see how early photographers both embraced and questioned the conventions of the dominant tradition; how technical limitations hindered their attempts to imitate painting; and how, in the process, they invented new ways of seeing the world, setting the stage for our modern visual culture.

All works are from the collection of Michael Mattis and Judy Hochberg. This exhibition was organized by the Barnes Foundation in association with art2art Circulating Exhibitions and curated by Thom Collins, Neubauer Family Executive Director and President of the Barnes.

This exhibition was produced as part of a new educational venture between the Barnes and the University of Pennsylvania, led by Collins and professor Aaron Levy, with curatorial contributions from students in the 2018 Spiegel-Wilks Curatorial Seminar Ars Moriendi: Life and Death in Early Photography.