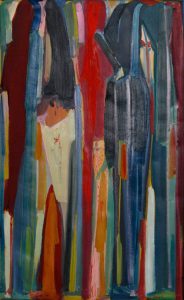 Marking the 25th anniversary of his death in 1993, Testimonies of Existence will feature paintings from the 1960s to the early 1990s interspersed with elements drawn from the foundation’s archive that document his life and prolific career. The exhibition explores key moments in the artist’s practice during this period and Guiragossian’s pivotal position in the history of modernism in the Arab world as well as among his generational peers.

By drawing on a range of influences and interests from ancient and modern art histories to philosophy in his practice, Guiragossian developed an approach that has become immediately recognisable. Driven by an early curiosity with the human form, the artist spent his career investigating the realm between figuration and abstraction. Acutely aware of the physical and psychological effects of exile and displacement, his personal experience as a refugee played a role in his nuanced awareness of the body. Born in Jerusalem in 1926 to Armenian parents, survivors of the Armenian Genocide, Guiragossian and his family migrated to Jaffa and eventually to Beirut by boat in the years leading up to the creation of the state of Israel in 1948.

The exhibition’s title is drawn from a quote from the artist’s own reflections where he described a work of art as being “sealed for eternity” and absorbing the time and place of its creation. “They are testimony to our existence, and we will always find something new in them,” he said, upon winning a prize at the first edition of the Paris Biennale in 1959.

Commenting on the show, Barjeel founding curator said: “Hosting a solo exhibition for Paul Guiragossian is an important milestone in our exploration of modernism through many exhibitions in the past few years. It’s exciting to have this as our final show in the Barjeel Art Foundation space at the Maraya Art Centre. The exhibit offers a rare glimpse into his remarkable career by drawing on the Paul Guiragossian archive, a resource that continues to expand as we gain more insight into an artist who is pivotal to the study of modernism in the Arab world.”

The entire exhibition, rather than offering a full survey of Guirgossian’s career aims to shed light on important moments and focal points. Paintings such as Silhouettes, a 1987 canvas borrowed from the collection of Sheikha Salama bint Hamdan Al Nahyan and Journey (1986/7), from Charles Al Sidawi exemplify Guiragossian’s approach. Long, drawn out figurative characters defined in varying palettes of vibrating colour, oscillates between figuration and abstraction in Guiragossian’s paintings. They tap into the multi-faceted condition of human experience. A significant number of paintings also focus on the relationship between mother and child such as La Lampe (1979) from the Barjeel Art Foundation collection and Le Centre Du Monde (1983) borrowed from the collection of HE Zaki Nusseibeh. The latter, for instance, depicts a tender embrace between mother and child in monochromatic colours. The appearance of maternal figures is an important symbol in Guiragossian’s works, often viewed as an image of hope and peace.