Barjeel Foundation: ‘Night was Paper and We were Ink’ 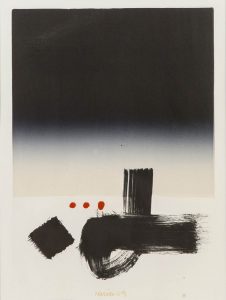 The exhibition contains a selection of works on paper from the Barjeel collection that include drawing, painting and printmaking from the mid-20th Century to the present. The works traverse a range of approaches, dealing with everyday encounters, documentation of historical events, and explorations of poetry, identity, and gesture.

The mid-20th Century saw the emergence of a number of avant-garde movements and moments that allowed for a great variety of expression. Artists responded to what they observed in the world – which was often rapidly changing and in conflict – in subjective and innovative ways. They also turned inwards and developed new visual languages to explore more introspective themes: abstraction, language, memory, and spirituality.

The use of paper, itself an ancient vehicle of carrying both text and image, allowed for a sense of immediacy and freedom for artists. Paper has long been the medium of choice for sketches and informal works, as well as a surface for complex and labour-intensive printing techniques. Deeply linked to the act of writing, paper is a material utilised by visual artists and poets alike.

Drawn from the opening line of the poem “The Beginning of the Road” by the poet Adonis in his book of love poetry The Book of Similarities and Beginnings (1980), a brief dialogue between lovers begins with “Night was paper and we were ink”.