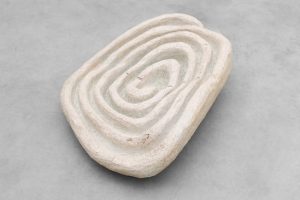 MARFA, TX – Ballroom Marfa will present the first solo museum exhibition in the United States of noted Brazilian artist Solange Pessoa in the fall of 2019. Pessoa has built a significant and internationally recognized body of work over three decades, which spans the mediums of painting, drawing, installation, sculpture, and video. The exhibition will include new work that responds to the cultural and natural landscape in West Texas, alongside important existing pieces made in Minas Gerais, Brazil, where the artist lives and works.

Pessoa’s expressive and telluric work draws inspiration from myriad sources: nature, the Baroque, dreams and the unconscious, Tropicalia, prehistoric cave paintings and carved tools, Land Art, traditional craft, ancestry, Surrealism, and poetry. These and many other references lie under the surface of a fully developed lifework wrought from sustained material investigation, intuitive curiosity, and an acute command of gesture and form.

Altogether five distinct bodies of work will converge for the show at Ballroom—displaying touch-points in the arc of the artist’s work and creating a connective tissue of imagery, ideas, and relationships between two distant places in North and South America.

For this exhibition, Pessoa will recreate a seminal installation originally staged in Brazil in 1994 that has not been seen since. In this immersive sculpture tiers of coffee bags are sewn together, suspended from the ceiling, and filled with fruit, flowers, seeds, bones, earth, and poems. Visitors are invited to rifle through this abundant hanging wall of materials, spilling, adding and co-creating with the sculpture itself. This phenomenological and sensual work engages viewers directly with the living land of West Texas—it’s colors, textures, decay and richness—while recalling the original work in Brazil from decades before, linking the two across time and space.

While Pessoa’s installations take on the flux and chaos of living materials, her monochromatic paintings and drawings elegantly distill the graphic essence of animals, insects, leaves, plants, and flowers. Often rendered with minerals, clay, or oils and dyes from native Brazilian plants, these compositions simultaneously invoke both ancient pictographs and Modernist painting. The artist will debut a new suite of paintings inspired by her research trip to Marfa, where she met local botanists and archeologists, explored the pictographs in Seminole Canyon and the Fossil Exhibit in Big Bend, and visited the Chinati Foundation and Judd Foundation for the first time.

Additionally, new ceramic pieces and existing soapstone carvings will populate the galleries. These natural materials, sourced in Brazil, are wrested from the landscape then shaped and carved to recall varied organic forms: vaginal voids, nipples, phalli, skulls, spirals, ancient fossils. The soapstone pieces will occupy the outdoor courtyard where they can be seen from all angles, their soft, hand-carved curves open to the sun and the rain. Bronze and feathered wall sculptures will adorn the hallway, simultaneously monumental and ephemeral, invoking the animal body–it’s death, life and decoration.

Pessoa’s practice is deeply rooted in land, human and natural history. In this focused exhibition, she gathers together references, materials and iconography from the environment of her homeland in Minas Gerais and Far West Texas, creating a conversation between shared forms and interwoven cosmogonies.