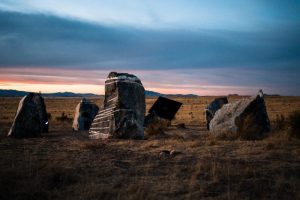 Inspired by ancient megaliths, this large-scale outdoor sculpture will be open to the public in the high desert grasslands east of Marfa, Texas. This project is a continuation of Ballroom’s signature practice of commissioning site-specific artworks and installations, and is our most ambitious public commission since Elmgreen & Dragset’s Prada Marfa was completed in 2005. The stone circle will open during the full moon on April 29, 2018, and remain in the landscape for five years.

Mirza’s stone circle refers to prehistoric monuments such as Stonehenge and Nine Ladies, megaliths erected by humans and used for mysterious practices related to communion with the Earth. The work features black marble boulders that produce patterns of electronic sound and light from energy generated by solar panels. Each of the eight stones in the circle is carved to integrate LEDs and speakers. The ninth stone, the “mother” stone, sits outside the circle. The mother stone’s solar panels charge a bank of batteries that will power a sound and light score that we will activate with each full moon. The stone circle is the second movement from Mirza’s Solar Symphonies series of artworks.

Ballroom Marfa is working with the artist to develop a calendar of dance, music, and performance events where artists will engage with and interpret the sculpture. This includes reprogramming the stones with a series of commissioned full moon compositions that will change the sculpture’s sonic presence over time. Additionally, Ballroom is developing a broad slate of supplementary programs, using education and multidisciplinary collaboration to expand on the stone circle’s ability to spark conversation and contemplation.

The stone circle’s impact also extends to our local community through initiatives with project partners Freedom Solar, the largest solar energy provider in Texas. Ballroom Marfa and Freedom Solar are hosting community forums on solar power, planning a hands-on solar education workshop at Marfa Independent School District, and creating opportunities for Far West Texas residents and business owners to switch to solar power. Freedom Solar has made a commitment to donate a solar power system to the City of Marfa’s Volunteer Fire Department in 2018.