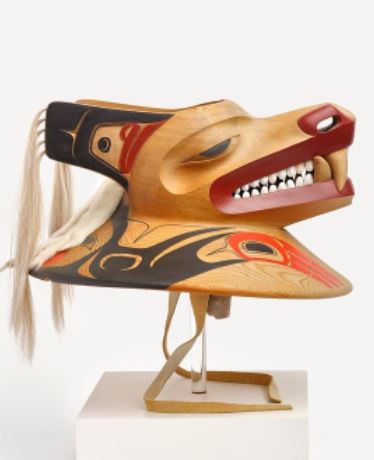 Wolves: The Art of Dempsey Bob

Wolves: The Art of Dempsey Bob at the Audain Art Museum from April 2 to August 14, 2022 is the first-ever retrospective of this brilliant carver’s career from the 1970s to the present. The exhibition features a critical selection of masks, panels, wall sculptures, vessels and regalia, complemented by Bob’s work in bronze casting, goldsmithing, printmaking and vestment production from public and private collections across Canada.

Dempsey Bob is from the wolf clan via matrilineal descent, and traces his ancestry through Tahltan and Tlingit peoples. As a child, Bob learned traditional stories from his extended family and these narratives would become the subject matter of his art. During the 1970s, the aspiring artist apprenticed with the noted Haida carver Freda Diesing followed by courses at the Gitanmaax School of Art in Hazelton. Through the 1980s he studied old Tlingit poles and masks, as well as taught and made art in Ketchikan, Hoonah, and Sitka, Alaska. From the 1990s onward, Bob has gained a reputation as one of British Columbia’s most gifted carvers with solo and group shows in Vancouver and across Canada, while totem pole raisings in the United States, England and Japan attest to his international standing.

This exhibition is a co-production of the Audain Art Museum and McMichael Canadian Art Collection, and among the masterpieces on display are Wolf Chief’s Hat (c. 1993), Raven Panel (1989) and Northern Eagles Transformation Mask (2011). Such works exhibit an expertise in carving cedar and alder, while underlining Bob’s signature torqueing of the form, highly polished surfaces, and ability to orchestrate materials including mirrors, operculum shell, acrylic paint and sea lion whiskers.

Dempsey Bob currently lives and works in Terrace, BC and was the recipient of a Governor General’s Award in Visual and Media Arts in 2021. This retrospective exhibition, that will tour to the McMichael Canadian Art Collection, Montreal Museum of Fine Arts and Kelowna Art Gallery, is accompanied by a fully illustrated hard cover book featuring the artist’s life stories and legends entitled Dempsey Bob: In His Own Voice.