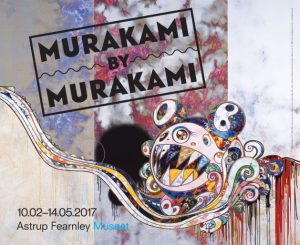 In the last twenty years, Murakami (b. 1962, Tokyo).has been extremely visible on the international art scene, but he has also taken an active role in Japan, redefining the position of the artist through his involvement in different arenas of society. The exhibition Murakami by Murakami features not only his artworks, but also aspects of his activities as a collector, gallerist, cultural entrepreneur and activist.

The exhibition explores the phenomenon that is Takashi Murakami from a number of different angles. Firstly, it presents the visual artist through a selection from two of his outstanding bodies of work: those from the late 1990s related to the character Mr DOB and the concept of ‘Superflat’, which placed him within the legacy of Pop art but with an exceptionally original artistic language, and works from recent years in which Murakami has developed an intelligent personal dialogue with Japanese historical paintings. A selection of video works is also presented, and once a week the museum will screen his feature film Jellyfish Eyes  (2013). Secondly, Astrup Fearnley Museet presents an insight into Murakami’s impressive art collection through an ‘exhibition within the exhibition’ featuring antique Japanese ceramics and painted scrolls, curated by Murakami himself. Finally, the artist has also curated a display of works by several of the contemporary Japanese artists he exhibits in his Kaikai Kiki Gallery, which he founded in 2008.