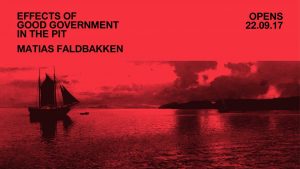 Matias Faldbakken (b.1973)  has received great attention and critical acclaim on the international art scene. While he has established a central position in the national and international art world, he remains engaged in a process of great creativity and continuous renewal.

A visual artist and a writer, Faldbakken references both modern and contemporary art history, as well as literature in his work. Deconstructing and undermining forms, altering ready-made objects, finding new configurations in collages, and experimenting with the use of words and the alphabet in his works, he invents his own artistic languages.

This exhibition, entitled Effects of Good Government in the Pit, presents Faldbakken’s works and preoccupations from the last decade, during which he has developed his project of questioning the function of objects and images in contemporary art and society. Conceived by the artist as a coherent installation, the constellation of videos, sculptures, collages, paintings and installations showcases his research and experimentation within different media.

In 2012, Matias Faldbakken participated in the prestige exhibition dOCUMENTA (13) in Kassel and in 2016 on the 11th Gwangju Biennale in South Korea. His works are included in public collections, such as the Centre Pompidou, Paris; Moderna Museet, Stockholm; Jumex Collection, Mexico City, Ellipse Foundation, Lisbon, and National Museum of Art, Architecture and Design, Oslo and Astrup Fearnley Museum in Oslo. Faldbakken is also known for his novels The Cocka Hola Company, Macht und Rebel and Unfun under the pseudonym Abo Rasul. His new novel The Hills will be released autumn 2017.