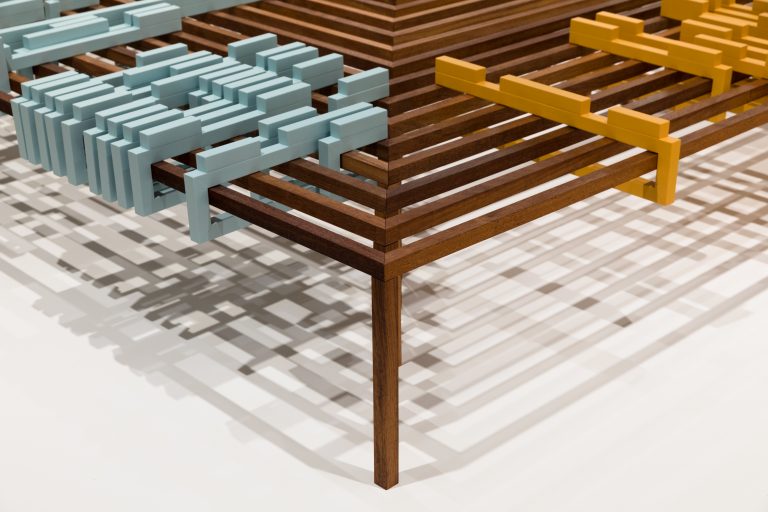 Dutch artist Riet Wijnen, for her first exhibition in Italy, presents the show Sixteen Conversations on Abstraction (table / table) at Assab One, curated by Kunstverein Milano.

The project, where Wijnen explores the socio-historical scope and breadth of the notion of ‘abstraction’, is part of the body of work titled Sixteen Conversations on Abstraction, started in 2015, offers a broad insight into the artist’s investigative methodology, bringing her textual and visual work as it zooms in on underrepresented female modernist artists and a tangible strand of a specific historical feminist movement.

Fifty years after the formation of the International Feminist Collective in Padova (Italy) in 1972 which had tasked itself to launch Wages for Housework campaigns in four different countries, Wijnen’s exhibition in Milan is dedicated to the Italian-American scholar and activist Silvia Federici, one of the founders of the Collective and front woman of the New York Wages for Housework Campaign, as well as one of the characters in Wijnen’s work Conversation Four: First Person Moving (2016).

Interested in historical personalities and narratives, Wijnen explores the notion abstraction in relation to language and perception, analysing its historiography, its discursive gaps and narrative potential in different fields, from early modernism in art, shifting gradually towards broader implications of the concept in fields such science, philosophy and activism. The cycle is developed around sixteen fictional conversations bringing together significant figures, subjects and positions from those different fields and times; sixteen subsequent works; and a table sculpture which functions as a diagram or score, mapping the connections amongst the different protagonists and topics in the conversations.

The artist states “The openness and transformative character of the conversation render it a suitable format to discuss the relationship between language and abstraction.”

In Sixteen Conversations on Abstraction (table / table) Wijnen employs different media and formats—sculptures, woodblock prints, fotograms and diagrams, text, fictional conversations, and type design—including new productions, such as the table and drawer projected to hold and share the documentation of The NY Wages For Housework collective—donated by Silvia Federici to MayDay Rooms in London, kindly loaned for the exhibition and made available to the Italian public—thus exploring, through the lens of abstraction, the feminist commitment of the well-known activist and scholar.

The presence of the table, which plays a central role in the project and Wijnen’s recent work, builds a bridge to Federici’s own work. At the heart of every domestic environment is the table as the place around which social roles and gender relations are expressed, understood and transmitted from one generation to the next. But it is also, as Silvia Federici testifies, starting from her own childhood experiences and reflections on decades on domestic and reproductive work, the space in which moments of transformation in society are conceived, discussed and animated. Through the proposition of ‘the table’, Wijnen aims in turn to establish a connection with the history of the second-wave feminist movements that began in northern Italy.

Writing conversations, Wijnen investigates the potential of imaginary scenarios as a method of opening up and questioning historical and socio-political constructs. The exhibition thus acts both as a framework and mirror for the contents of the cycle Sixteen Conversations on Abstraction, between the concrete and the abstract, the material and the conceptual, history and canon with their alternative readings. But also as a moment of reflection starting from the relationships between voices, ideas and practices that are interwoven in the present.