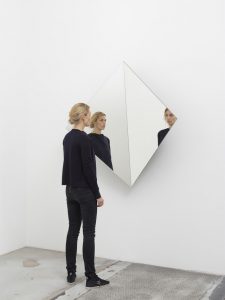 Taking its cue from John Berger’s 1972 groundbreaking text on visual culture, the eponymous exhibition explores the various formalistic strategies that artists employ to re-configure our perception of the world. Ways of Seeing brings together 33 artists a majority of whom will be exhibited for the first time in Turkey. The exhibition consists of 70 works ranging from 1000 BC to the present and spanning a variety of media from painting, sculpture and photography to sound, film and installation. It includes a number of seminal works such as an early 1968 projection piece by James Turrell, one of the vertical construction installations of Fred Sandback, video pioneers Paul and Marlene Kos’s 1976 “lightning” video, and two of Gustav Metzger’s “Historic Photographs” along with a number of his early 1940s drawings.

Ways of Seeing invites the viewer to investigate the manifold ways by which artists accord forms and concepts that are otherwise familiar with renewed appearances and meanings. Each of the artworks on display beckons us to take a second look, upon which the contours of a new reality begin to emerge. Some of the artists in the exhibition, such as James Turrell, Hans-Peter Feldmann, or Fred Sandback, blur the boundaries between the artwork and the space in which it is displayed. Others, such as James Webb, Vik Muniz, Walid Raad or Gustav Metzger, provide the viewer with a new way of accessing the artwork. A few, like Shana Moulton, Chris Bond, Andreas Gursky or James Casebere, push the technical and formal possibilities of their genre. Finally, there are also those like Salvador Dali, Mona Hatoum, Alicja Kwade, Hassan Sharif, or Markus Schinwald who alter familiar objects in order to give them a renewed meaning.

The viewer’s desire to understand an artwork can never be fully divorced from the politics that underpin the traditions in which it was created, and the mechanisms that are used for its display. Ways of Seeing unfolds along a non-linear temporal thread that challenges the rigidity of periods, genres, and so-called “isms.” Several of the artworks provide a critique of the art-historical references that appear within them, highlighting the politicized contexts in which they are often encountered; a sub-theme that this exhibition examines.

Ways of Seeing facilitates a return towards a vision of the artist as a maker of things, a skilled technician, who through their understanding and handling of the physical properties of things can alter our way of seeing. Artists relentlessly remind us that the connection between what we see and what we think we know is never that simple, and that seeing is, at its core, a political act.

This international group exhibition is curated by Sam Bardaouil and Till Fellrath, founders of the multi-disciplinary curatorial platform Art Reoriented, and co-chairmen of the Montblanc Cultural Foundation.