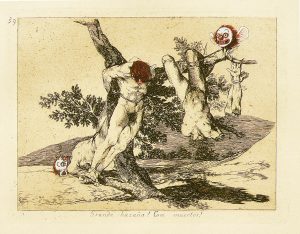 For 25 years Jake and Dinos Chapman have pursued a rigorous, profoundly philosophical and programmatic art practice. Their work manifests a deconstructive imperative—a reflexive critical impulse to interrogate the multiplicity of relations that serves to condition, create and situate the work in the world. In this spirit their work attacks Enlightenment-derived ideological assumptions that still largely characterise the West’s perception of culture and its redemptive potential. They co-opt the exhausted semiotics of both mainstream consumer and contemporary art culture to expose and mock this unthinking belief in progress. In doing so, their work articulates a virulent, philosophical pessimism.

In the Realm of the Senseless begins on Arter’s ground floor in spectacular fashion by bringing together more works from the Chapmans’ famous “Hell” series than have ever been seen together before. Absurd, surreal and painstakingly detailed, the dioramas comprise of thousands of model Nazi soldiers engaged in scenes of orgiastic violence and include other figures familiar from the Chapmans’ oeuvre such as Hitler and Ronald McDonald.

Resembling a show put together from a ransacked storage room, the floor is chaotic and over-stuffed, filled with myriad two dimensional and sculptural works. Included are works from “The Chapman Family Collection,” sculptures that collide the iconography and overloaded symbolic meanings of African tribal art with the visual universe of McDonald’s, “One Day You Will No Longer Be Loved,” a series of “found” 19th century British portraits that the Chapmans have overpainted and an archive of juvenilia—works made by the Chapmans from 1971 onwards.