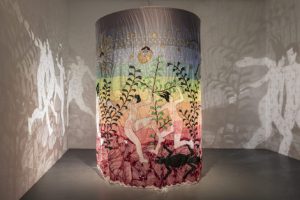 The exhibition brings together new works CANAN produced especially for this exhibition along with a number of earlier works, some of which are shown for the first time ever. Unfolding across Arter’s three gallery floors, “Behind Mount Qaf” constitutes a comprehensive overview of the artist’s practice.

The exhibition is named after the legendary Mount Qaf of Arabic and Persian cosmology and includes works produced in various media, such as sculpture, photography, print, embroidery, video, installation, and miniature. “Behind Mount Qaf” proposes a reading of the artist’s practice through the themes of Heaven, Purgatory and Hell. CANAN’s new works focus on dualisms such as light/shadow, good/bad, internal/external, reality/imaginary, lightness/darkness, and tackle the repressed aspects of the human psyche in the form of supernatural creatures, the jinn and archetypical figures, culminating in a multidimensional, mystical, symbolic, and rather enticing universe.

The photograph titled “Cybele” (2000), which greets the viewer on the ground floor, is a self-portrait exhibited for the first time and represents the mother goddess through the artist’s own body. Miniatures titled “Shahmaran” (2011) and “Şehretün’nar” (2011), the mother of all jinn, once again depicted by the artist using her own face, guide the viewer through different states of consciousness on the three exhibition floors conceptualised as Heaven (ground floor), Purgatory (floor 1), and Hell (floor 2).

The first of the many spatial installations in “Behind Mount Qaf”, “Animal Kingdom” (2017) is a site-specific work produced for this exhibition and is located on the ground floor. Covered in brightly coloured and sequined fabrics, animals, and creatures such as dragons, serpents, and the phoenix, all of which exist only in fairy tales, fill up the gallery space overlooking Istiklal Street. Visible both from the outside through the gallery window and from within the exhibition space itself, this installation connects the interior and the exterior in a world of fantasy.

Another new work situated on the Heaven floor is a video titled “Women Bathing in Moonlight” (2017). In this video shot on a full moon night on one of the Prince’s Islands (Burgazada) in Istanbul, a group of young women in summer dresses with flowers in their hair are first seen at the top of a hill, howling like wolves at the full moon. They then walk down to the seashore with joyous laughter and bathe in the sea. This mysterious almost archaic ritual constitutes a contrast with the cityscape in the background.

The work titled “Heaven” (2017) reaches down from the ceiling in the form of a cylinder made of tulle; rotating slowly around its own axis, it establishes links between the visible and the invisible, the real and the imaginary worlds, through a play of light and shadow. In the installation, as the male and female figures revolve in the cylinder accompanied by the seven colours of the rainbow and fairy tale-like creatures, the shadows of their naked bodies linger on the walls. The masculine and feminine qualities blend into one another, and as we approach them they start to intermingle with our shadows as well. Meanwhile, the installation “Purgatory” (2017) construes the same setup on Arter’s first floor; but this time through the theme of Purgatory. Dominated by various shades of grey, the tulle installation relates the tale of a character that flows out of the darkness in the company of birds and angels. The exhibition concludes with the installation “Wonders of Creation” (2017), which spreads across the entire second floor gallery. Here, the human figures disappear completely, as the jinn take over the stage. This hell, in which jinn figures drawn with fluorescent paints on tulles have spread across the significantly dimmed space, invites us to confront our own fears, face the beast within and learn to coexist with the ones we see as jinn.