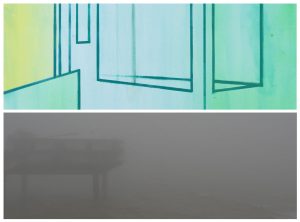 Can Aytekin’s solo exhibition Empty House is on view on the first two floors of Arter, comprising the artist’s new series by the same name as well as a selection from his previous five series produced after 2005. Featuring paintings on canvas and drawings for the most part, the exhibition also includes a number of three-dimensional works by the artist. Curated by Eda Berkmen, Empty House invites the viewer to a game of remembering and imagining. Aytekin’s new series of the same name feature a house that has been purged of all kinds of details, the weight of furniture, and the clutter of everyday life’s necessities. The contours, outlines of colours and fold lines constitute the rooms, corners, corridors, and beams of an empty house. The paintings in this series derive from a house that existed in Aytekin’s past, a model of which is also on display; however, this house has been conveyed on canvas only after being merged with various similar spaces from the memories of the artist, and the exhibition space itself. This construct, which refrains from affectation and explicit depiction, is reduced to its simplest form, evoking other spaces, memories and dreams.

On its second floor, Arter presents Ali Mahmut Demirel’s first solo exhibition in Istanbul titled Isle. Curated by Başak Doğa Temür, the exhibition brings together Demirel’s new video series “Post-Apocalyptic Utopias,” in which the artist observes abandoned architectural structures, with one of his first experimental videos named The Hose (2000). Exhibited together for the first time at Arter, The Pier (2015), The Pit (2017) and The Plant (2018) comprise the “Post-Apocalyptic Utopias” series. The Pier was shot in the Netherlands at the Scheveningen Pier, which operated as a recreational facility between 1959 and 2013; The Pitat a 19th century cistern on the outskirts of Turgutreis in Bodrum; and The Plant at the Packard Automotive Plant, which operated from 1903 until the early 2000s in Detroit, USA. Setting out to envision a post-apocalyptic future with no human survivors, the artist looks at each one of these structures constructed in different centuries for different purposes, all the while posing the question: “What sort of a life do structures lead in the absence of the humans they were designed to serve?”