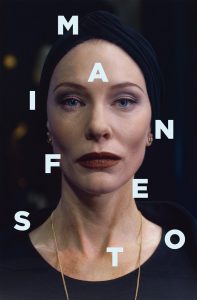 The Museums inaugural exhibition is the first comprehensive institutional solo show of Julian Rosefeldt in China since 2012 and presents important aspects of Rosefeldt’s production over the past 12 years. Comprising five film installations and 21 photo works, the recent and widely known work Manifesto marks the heart of the exhibition. It is our great honor to present the film installation for the very first time in Asia on occasion of the museum’s opening.

Manifesto (2015) is a 13-channel film installation that pays homage to the moving tradition and literary beauty of artist manifestos. Manifesto draws on the writings of artist groups, as well as the musings of individual artists, architects, dancers and filmmakers. Passing the ideas of Kazimir Malevich, André Breton, Jim Jarmusch and other influencers through his lens, Rosefeldt has edited and reassembled 13 collages of artists’ manifestos. Performing this “manifesto of manifestos” as a contemporary call to action, while inhabiting 13 different personas, actress Cate Blanchett imbues new dramatic life into both famous and lesser-known words within unexpected contexts. Manifesto questions whether the words have withstood the passage of time and what is the role of the artist in society today.

Meanwhile, Rosefeldt’s two most recent film works, In the Land of Drought (2017/2015) and The Swap (2015) are exhibited. The works comment upon recent discourses debating the future of our planet and society, while referring to different film genres. The Ship of Fools (2007) and Clown (2005), Rosefeldt’s previous works exploring the relationship between man and nature are also presented in the exhibition. The exhibition receives support from Department for Culture and Education of the German Consulate General Shanghai.

Manifesto has been co-commissioned by the ACMI – Australian Centre for the Moving Image Melbourne, the Art Gallery of New South Wales Sydney, the Nationalgalerie – Staatliche Museen zu Berlin and the Sprengel Museum Hanover. The work is co-produced by the Burger Collection Hong Kong and the Ruhrtriennale. It was realized thanks to the generous support of the Medienboard Berlin-Brandenburg and in cooperation with Bayerischer Rundfunk.

About Julian Rosefeldt
Julian Rosefeldt, born in Munich, Germany in 1965, is a Berlin-based artist and filmmaker. He is internationally renowned for his visually opulent and meticulously choreographed moving image artworks, mostly presented as multi-screen installations. Rosefeldt has had numerous international exhibitions at museums including Park Avenue Armory Hall, Hamburger Bahnhof – Museum für Gegenwart, Australian Centre for the Moving Image. His work is held in collections including the Neue Nationalgalerie, Saatchi Collection and the Museum of Modern Art.

About HOW Art Museum
HOW Art Museum was founded by the Chinese collector Mr. Zheng Hao, and Mr. Yun Cheagab was appointed as director of the museum since 2012. It enjoys two museums, namely HOW Art Museum (Shanghai) and HOW Art Museum | Wenzhou. The latter opened in 2013, and has held nearly 20 contemporary art exhibitions.

After five years’ preparation, HOW Art Museum (Shanghai), as a brand-new cultural institution which boasts multiple functions including contemporary art collection, exhibition, research and education will open to public in September, 2017. It pioneers to create a new model of operating a “Night Art Museum” for the convenience of the public, opening from 1 to 10pm regularly, and 10am to 10pm on the weekends and holidays. Meanwhile, HOW Art Museum also carries out international exchange programs and outdoor public activities, such as the International Curatorial Residency Program, Outdoor Film Festival and Sculpture Park to establish a brand-new art complex and cultural landmark in Shanghai.