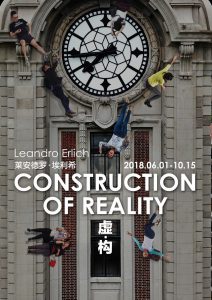 This major solo exhibition by Argentine artist Leandro Erlich brings together over thirty artworks by Erlich, covering his large-scale interactive installations, video installations, and photography, including thirteen monumental interactive installations that offer the audience uncanny experiences via optical illusions. By transforming the architectural spaces through jarring reflections and fascinating labyrinths that disrupt the viewers’ sense of balance and orientation, the artist invites us to question our normal perception of everyday experience.

Titled Construction of Reality (in Chinese “xū.gòu”—a combination of xū, meaning illusion, and gòu, meaning construction) this exhibition unfolds the complex duality that characterizes Leandro Erlich’s artistic approach: by way of investigating the ephemeral, illusive aspect of the visual world, he recreates or even reverses the given logic of architectural space. For this solo show at HOW Art Museum, Erlich presents the most recent version of his series Reflective Optical Illusion Building, a new interactive installation in resonance with the historical and cultural landscape of Shanghai. Named Building – Shanghai Bell Tower (Hanging on Time), this piece appropriates the style of the main building of the former Shanghai Art Museum, now known as the Shanghai History Museum. Other showcased works include Staircase, The Classroom, Lost Garden, which as a group make up the magical world constructed by the artist.

Trained as an architect, Leandro Erlich is known for his extravagant imagination and unique manipulations of mirrors, projections, and architectural spaces with which he recreates and represents reality in surreal ways. Spectators entering his works immediately encounter the artist’s contemplation of the relationships between bodies and spaces, the individual and society. His works tend to be site-specific in terms of both conception and production, taking into consideration the specifics of his venues and materials, and they are open to interaction with the local architectural and lived spaces.

This exhibition is organized by the curatorial team at HOW Art Museum, and co-presented by HOW Art Museum and the studio of Leandro Erlich. Our special thanks go to Galleria Continua and Art Front Gallery without whose generous support this exhibition would not have been possible.