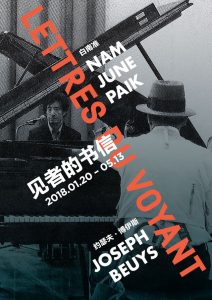 The exhibition presents the representative works by German artist Joseph Beuys (1921–86) and Korean-American artist Nam June Paik (1932–2006) throughout their artistic careers, and further discusses the cooperation and close relationship between these two avant-garde artists in the 20th century. Lettres du Voyant is another major exhibition of HOW Art Museum (Shanghai) following the inaugural exhibition MANIFESTO: Julian Rosefeldt. Works 2005-2017. It is also the first institutional joint exhibition of the two artists who left a generous legacy of 20th century.

The exhibition title, Lettres du Voyant (Letters of the Seer) derives from the works of the same name by Arthur Rimbaud, a famous French poet and representative of symbolism poetry in the 19th century. In Rimbaud’s letter, voyant (seer) elucidates a visionary figure with an eye on the present that pierces through to the unknown. A voyant can predict the imperceptible future, while inherently cultivating a soul richer than others. Joseph Beuys has presented one of the most explorative artistic approaches of the Western contemporary art, while Nam June Paik is a superlative representative of the Eastern culture in the contemporary art world. Spearheading two unexplored trends, Beuys and Paik’s works can be considered as personifications of their time and experiences. Lettres (letters) implies the inextricable relations between the works of Joseph Beuys and Nam June Paik, and hints at the profound friendship between these two significant artists during the Fluxus art movement.

HOW Art Museum invites Dr. Gregor Jansen, Director of Kunsthalle Düsseldorf and international curator, and Mr. Kim Nam Soo, Korean art critic and former academic researcher of Nam June Paik Art Center, to serve as the curators for this exhibition and to jointly complete the curatorial and research work with the curatorial team of HOW Art Museum. The exhibition receives support from Department for Culture and Education of the German Consulate General Shanghai and Korean Cultural Center, Shanghai.