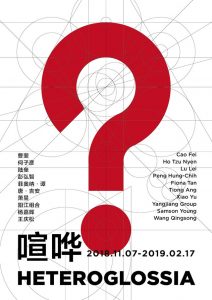 This exhibition brings together a group of artists actively engaged in the contemporary art scene, from across the world including Mainland China, Hong Kong, Taiwan, Singapore, and the Netherlands. The featured artists include Cao Fei, Ho Tzu Nyen, Lu Lei, Peng Hung-Chih,Fiona Tan, Tiong Ang, Xiao Yu, Yangjiang Group, Samson Young, and Wang Qingsong. They have been exposed to the general influence of Chinese culture, yet they have evolved along different trajectories by incorporating distinct varieties of historical experience, memory, and identity. Growing up in an age of increased globalization and accelerated economic development, a world that keeps changing so fast particularly through innovations in new technologies and media, this generation of artists experienced a markedly different world from their predecessors. Their works make use of the media and materials produced by and populating our current society, and offer unique observations upon as well as distinct insights into each specific site and zeitgeist they inhabit.

Heteroglossia, also known as the theory of polyphony, was a concept introduced by the Russian literary critic Mikhail Bakhtin to summarize the unique characteristics of Fyodor Dostoevsky’s novels. The term refers to the coexistence of different languages as well as the conflicts between them, and it also reflects the plurality and fluidity that characterizes our contemporary culture and society, where independent, uncompromising voices and ideas come at us through a variety of different agencies, but which nonetheless intertwine with each other and participate equally in the discussions and debates of a shared contemporary landscape. The wave of globalization has lent momentum to the acceleration of this movement towards pluralism. Meanwhile, this same globalization has witnessed the expansion of nationalism, and the increased tensions and segregations that have emerged along territorial borders. In other words, along with the consequences of global standardization at the superficial level, radical changes have simultaneously germinated within society. As the theme of this exhibition, Heteroglossia also provides a critical line of inquiry into it, and invests the whole exhibition by formulating a dialogue between the artists and a world that has become more and more complex and challenging.

Featured in this exhibition are installations and videos, accompanied by other forms of art such as performance and multimedia installations. In terms of artistic form, they are invariably influenced by media technologies in a globalized world. Meanwhile, they also represent the artists’ active responses to some of the most sensitive and significant events and issues of our contemporary society. Through this presentation HOW Art Museum wishes to build a platform for dialogue, and to convey to the public our thoughts and concerns regarding the “contemporary.” At the same time, we look forward to the participation of the public and listening to different voices and ideas from individuals.

This exhibition receives supports from Mondriaan Fund and Dutch Consulate: Kingdom of the Netherlands.