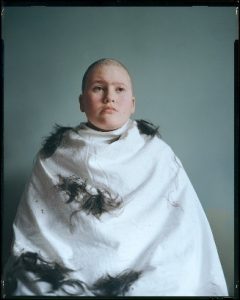 An exhibition spotlighting three midcareer photographers who were provided grants by WeTransfer, which will be on display this September at Aperture in New York. Selected by a panel of judges convened by WeTransfer, including Alessia Glaviano, senior photo editor at Vogue Italia; Michael Famighetti, editor of Aperture magazine; and Yumi Goto, independent photography curator, the three photographers—Siân Davey, Janet Delaney, and Joe Nishizawa—received $10,000 grants to produce new work, all of which explores physical and psychological landscapes. New work by Siân Davey and Joe Nishizawa will debut at the exhibition, and a series from the 1980s by Janet Delaney will be exhibited for the first time in New York. Refocus will be on view September 10–September 26, with a celebratory reception on Tuesday, September 11.

With a user base that overwhelmingly identifies as creatives and a file-sharing platform used to send digital imagery, WeTransfer is dedicated to serving photographers and spotlighting underrepresented groups in the community. Since its founding in 2009, WeTransfer has supported artists and creatives in a variety of ways, from providing them with free advertising space to commissioning new projects. Similarly, Aperture Foundation seeks to continually innovate in the ways the organization explores and enables new horizons in the discipline and supports the field. WeTransfer and Aperture’s partnership aims to support midcareer photographic artists who have new and compelling perspectives to share.

The three photographers whose work is included in this exhibition come from different continents, contexts, and professional backgrounds, but all use photography as a way to explore and understand the world around them, providing a fresh and nuanced perspective on space, relationships, and the effect of the built environment. These artists include:

Siân Davey (United Kingdom, 1964) is a psychotherapist who, in the past five years, has returned to her roots in the fine arts to explore themes that have resonated throughout her life and career. This project, like much of her work, centers on her family, exploring psychological landscapes of those around her.

Janet Delaney (United States, 1952) is a Bay Area photographer whose work balances on the intersection between fine art and the document. Most recently, she has been recording the rapid transformation of the SoMa district of San Francisco, an area that was the focus of her earlier photographic project, South of Market 1978–1986.

Joe Nishizawa’s (Japan, 1967) work explores life and industry in contemporary Japan, especially in the aftermath of environmental disaster. One of his most compelling series to date documents the nuclear plant in Fukushima before and after the 2011 disaster; his project in this exhibition will dive further into this process, documenting the research facility where nuclear waste is discarded.

“As a tool that’s used by millions of creatives from a wide range of backgrounds, we are always trying to tell a diverse set of stories. Age often gets left out of the discussion about diversity, so we are delighted to help bring that to light with this year’s grant. It’s a real pleasure to work with Aperture and bring these three amazing photographers to our audience.”

Following the Aperture exhibition in New York, the works of Joe Nishizawa, Siân Davey, and Janet Delaney will be presented on WeTransfer’s digital platform to engage a broader public of practitioners and enthusiasts around the globe.

Following a career as a psychotherapist in private practice, British photographer Siân Davey launched a career in photography in 2014, drawing on her experiences as a physiotherapist and mother to inform her practice..  Her work is an investigation of the psychological landscapes of both herself and those around her. Her family and community are central to her work. Notable series include works that focus on the lives of her children individually, from an exploration of the experience of her daughter Alice, who has Down syndrome, to a documentation of the life of her teenage daughter Martha and her friends. She has been the recipient of numerous prizes, including the Taylor Wessing Photographic Portrait Prize and the Paris Photo–Aperture Foundation PhotoBook Award, and has been exhibited internationally, including at the Västerbottens Museum, Umeå, Sweden, and National Portrait Gallery, London. Born in Brighton in 1964, Davey has studied painting (Bath Academy of Fine Art, 1985) and social policy (University of Brighton, 1990) and, more recently, photography (Plymouth University, 2014 [MA] and 2016 [MFA]).

Janet Delaney is a photographer and educator based in Berkeley, California, whose work focuses on urban issues. She is currently documenting the rapid transformation of the SoMa district of San Francisco, an area that was the subject of her earlier project, South of Market 1978–1986. Delaney has received a number of awards, including three National Endowment for the Arts grants and the Phelan Award. Her photographs are in California collections, such as the San Francisco Museum of Modern Art, de Young Museum, and Pilara Foundation, among others. Her work has been shown both nationally and internationally. Delaney received her MFA from the San Francisco Art Institute in 1981; she held the position of adjunct lecturer at the University of California, Berkeley, for over twelve years, and has taught in the undergraduate and graduate programs at the San Francisco Art Institute.

Joe Nishizawa is a photographer living and working in Japan, focused on documenting the built environment, industry, and their effects on the natural landscape. For the last fifteen years, Nishizawa has documented steelwork factories and other construction sites, using his photographic practice to educate the public about the unseen industries that make our lives possible. After the nuclear disaster occurred on March 11, 2011, Nishizawa was compelled to document the reactor and the decommissioning efforts over time. He was granted access to the plant roughly once a month and has returned to photograph ever since. Nishizawa’s work has been published in eight books profiling and documenting the built environment in Japan.

About WeTransfer and its Support of Creativity

Since 2014, WeTransfer has provided grants, commissions, and scholarships to creatives across disciplines, carving out the space and opportunity for experimentation and the creation of new, innovative work. WeTransfer’s grants support arts, education, and innovation broadly, from offering grants to laid-off SoundCloud employees to encourage them to start new endeavors, to underwriting a portion of the costs of the groundbreaking, tuition-free University of the Underground, to providing direct grants to photographers to produce new work.

Since its founding, WeTransfer has proudly supported the creative communities and given up to 30% of our advertising to support the arts, donating over 5 billion impressions in 2017. Through our ongoing advertising grant program and content platform, WePresent, we have partnered with hundreds of groundbreaking artists, including Nadia Lee Cohen, Ryan McGinley, and Ami Vitale. Above all, we hope these stories encourage other people to make something new themselves. Because inspiration means more when you do something with it.

Aperture, a not-for-profit foundation, connects the photo community and its audiences with the most inspiring work, the sharpest ideas, and with each other—in print, in person, and online. Created in 1952 by photographers and writers as “common ground for the advancement of photography,” Aperture today is a multi-platform publisher and center for the photo community. From its base in New York, Aperture Foundation produces, publishes, and presents a program of photography projects and programs—locally, across the United States, and around the world.