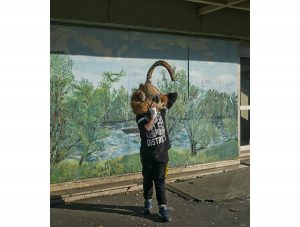 In 1999, Claude Iverné first set off along the Darb al Arba’ïn (Forty Days Trail), the ancient caravan route linking Egypt and the sultanate of Darfur. Ever since, Iverné has been working in the region, focusing on North Sudan in particular, wandering through the country to create a body of work. His photographs use an anthropological approach while simultaneously creating space for the viewer’s imagination.

In 2015, with the support of the HCB Award, Iverné continued his project, this time traveling through South Sudan. Bilad es Sudan records the precipitous transformation of South Sudan, mapping its historical details and contemporary landscape. This second phase mirrors his previous body of work, but while he depicted the North in black and white, the South is shown in color.

As a result of the political climate in South Sudan at the time, many Sudanese citizens fled to France. Iverné followed them there, exploring this journey from the nomadic tents and deserts of Sudan to the outskirts of French cities. Iverné’s photographs investigate the economic, cultural, and environmental changes of this country, concluding his Sudanese epic.

This exhibition, first shown at the Fondation Henri Cartier-Bresson, is one “draft” of this immense work, one of the strata of this collection, in collaboration with the Fondation d’entreprise Hermès, partner of the HCB Award. The book Claude Iverné – Bilad es Sudan, published by Éditions Xavier Barral, accompanies the exhibition, providing a different reading, a transformed essay, a friable stone in the fragile edifice of history.

Claude Iverné (born 1963) lives and works in France. Trained in the world of fashion photography in Paris, London, and New York, Iverné worked with the most renowned names of the profession, including Pierre Cardin, Lord Snowdon, Paolo Roversi, David Bailey, and Albert Watson. Since his first trip to Sudan in 1999, Iverné has worked on the concepts of territory and identity, and on the codes and standards of representation that are linked to these notions. In 2003, he created the collective Elnour (The light), a research and documentation office where photographers, artists, scientists, and writers coexist and work on Sudan. He has exhibited at Rencontres d’Arles (2002); the United Nations, Khartoum, Sudan (2002); Maison des Métallos, Paris (2003, 2012); Centre Culturel Français, Khartoum, Sudan (2004); Musée Royal de Mariemont, Belgium (2007); Visa Pour l’Image (2007); Egyptian Cultural Center, Paris (2010); Musée Nicéphore Niépce (2016); and Fondation Henri Cartier-Bresson (2017).