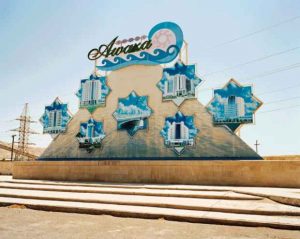 In 2010, the artist Chloe Dewe Mathews traveled overland from China to the U.K., where she currently lives and works. When she arrived on the shores of the Caspian Sea, she began documenting scenes that intrigued her: stonemasons with their faces covered, building elaborate mausoleums in Kazakhstan for the oil-rich middle class, or health tourists in Azerbaijan, bathing in crude oil for its therapeutic benefits. As she returned to the region repeatedly over the following five years, she sought out stories that raised questions about the human relationship with natural resources in a much-coveted territory.

Positioned between the two great continents of Asia and Europe, the Caspian is described as both an inland sea and the world’s largest saltwater lake. Since the dissolution of the Soviet Union in 1991, it has remained outside the territorial boundary of any country, although Kazakhstan, Azerbaijan, Turkmenistan, Iran, and Russia have all laid claim to it, each vying for the maximum share of its mineral-rich seabed and the strategic access it provides to international waters. Twenty-seven years later, in August 2018, a deal between the five countries was reached, but its consequences remain to be seen.

Away from the wranglings of geopolitics, Dewe Mathews found that materials like oil, fire, uranium, and water are integral to the mystical, economic, artistic, religious, and therapeutic aspects of daily life. Caspian: The Elements offers a series of powerful visual narratives, a portrait of this beguiling and elusive land.

Chloe Dewe Mathews is the 2014 recipient of the Robert Gardner Fellowship in Photography, a fellowship given annually by the Peabody Museum of Archaeology & Ethnology at Harvard University to a photographer who has demonstrated great originality working in the documentary vein.

Aperture Foundation’s public programs and exhibitions are supported, in part, by generous donations from our Board of Trustees, our Members and other individuals, and major support from foundations, including Ford Foundation, Grace Jones Richardson Trust, Henry Luce Foundation, The Andy Warhol Foundation for the Visual Arts, and The Reba Judith Sandler Foundation, and public funds from New York State Council on the Arts with support of Governor Andrew M. Cuomo and the New York State Legislature, and the New York City Department of Cultural Affairs in partnership with the City Council.