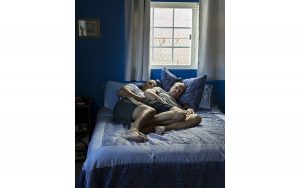 Where do you feel most at home? In a year when thousands of migrant children have been sent to live in tent cities, rents for a San Francisco apartment average $3,750, and wildfires have destroyed entire communities, the question of how people define “home” has never felt more urgent. Some feel nostalgic about where they came from, some never left the towns they grew up in, and others couldn’t wait to leave. At Home features a variety of emerging and established photographers — including Ahndraya Parlato and Gregory Halpern, Texas Isaiah, Pixy Liao, Ricardo Nagaoka,Irina Rozovsky, Mark Steinmetz, and others — who traveled through ten states in the American West and spoke to people about what, and where, home is. The series includes a formerly homeless woman who finally feels settled in her tiny house in Seattle, a single mother who found her sanctuary living off the grid in the New Mexico desert, a couple who built their dream mansion in the mountains, a DACA recipient who has proudly purchased his first home in Utah, and a Los Angeles native who feels at peace by the ocean.

This exhibition coincides with the publication of The California Sunday Magazine’s December special issue in which all stories will be told through photography, focusing on a single theme: Home.

At Home is sponsored by Google Pixel, which launches the Google Pixel 3, with its most advanced camera, in the U.S. today. Google Pixel is also the exclusive photography sponsor of The California Sunday Magazine’s December issue, which will be available online at www.californiasunday.com on November 29 and in print on December 2.

About the California Sunday Magazine

Aperture, a not-for-profit foundation, connects the photo community and its audiences with the most inspiring work, the sharpest ideas, and with each other—in print, in person, and online. Created in 1952 by photographers and writers as “common ground for the advancement of photography,” Aperture today is a multi-platform publisher and center for the photo community. From its base in New York, Aperture Foundation produces, publishes, and presents a program of photography projects and programs—locally, across the United States, and around the world.