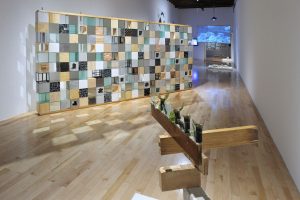 Museo Amparo is a private institution founded in 1991 by Manuel Espinosa Yglesias and his daughter Ángeles Espinosa Yglesias Rugarcía in memory of Amparo Rugarcía de Espinosa with the commitment to acquire, preserve, research, and display Pre-Columbian, Colonial, Modern, and Contemporary Mexican art. The Museum exhibits permanently its Pre-Columbian, colonial and 19th-century art.

Since its foundation, it has implemented an art acquisition program to enrich its collection and present to the public an overview of Mexican art through different periods. Currently, Museo Amparo’s Contemporary Art Collection is conformed of works mainly of Mexican artists, covering diverse genres like painting, drawing, collage, photography, sculpture, video and video installation.

Lecturas de un territorio fracturado (Readings of a fractured territory) is a first exercise to show the public part of the Contemporary Art Collection. The plurality of this selection of 58 works is revealing as it integrates several genres that circulate between the idea of Mexican culture, one of the main axes of the project of modernity, and the urgency of being a contemporary collection with artists whose aesthetics move within a chronicle of Mexican as an artistic and political category. This condition points to a constant negotiation between two artistic discourses that have been historically opposed: how to be multicultural and remain Mexican? And in the proximity of a policy of cultural implications of the private in the historical and political context that in a great measure was liable to the State.

In this sense, Lecturas de un territorio fracturado is proposed as a group exhibition that examines the diversity of aesthetic strategies of artists from different generations that resume in their arguments criteria from the project of modernity to propose a critical and reflective commentary on the implications of contemporary representation.

Lecturas de un territorio fracturado gathers a series of proposals under the notion of territory, deploying several artistic arguments that operate, on the one hand, from a reflection on the ideals of a collective imaginary anchored to official narratives, and on the other, establish a rethinking of the relationship between form and concept. It also highlights the representation of the social fracture we inhabit alluding to the complex panorama of local artistic production, fissured by the country’s social and political reality.