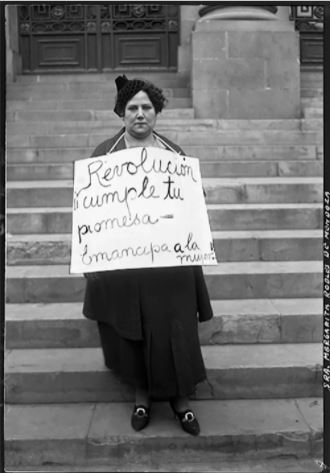 The political potential of love —its strategies, manifestations, its character both intimate and public, and how it shapes community and creates legislation —form the backdrop of Dora García’s works.

Dora García presents Revolution, fulfill your promise!, a project that includes her two more recent films focused on the exceptional legacy of Alexandra Kollontai (St. Petersburg, 1872 – Moscow, 1952), an author, Marxist feminist, sex activist, political exile, and diplomat. Love with Obstacles (2020) and If I Could Wish for Something (2021), which will premiere in the US, are the first and second chapters of a trilogy that will culminate with Red Love (2023). Dora García traces and seeks to comprehend how the ideas Kollontai coined and implemented at the beginning of the 20th century, have been translated and transmitted across the globe, and how they have mutated, disappeared, and reemerged through the different waves of feminisms until today.

Love with Obstacles departs from research into the Kollontai files at the Marx-Engels-Lenin Institute (now RGASPI) in Moscow and features four letters, a short science fiction narrative, and a handwritten note. These documents are read by six different contemporary women, voicing Kollontai’s story of enthusiasm, disappointment, and faith in the future. The reading portrays the complexity of the figure of Kollontai, in contrast to how she has been officially presented in Russia. If I Could Wish for Something picks up a thread from Love with Obstacles–the image of a hand-carved present the Mexican workers gave to Kollontai when she was ambassador in Mexico–and jumps into present-day Mexican feminisms and transfeminisms.

Kollontai’s legacy is central to any genealogy of modern feminism and her ideas on radical social change continue to inspire and mobilize a new generation of feminist thinkers and activists.