Alexander Tutsek-Stiftung: “About Us. Young Photography from China” 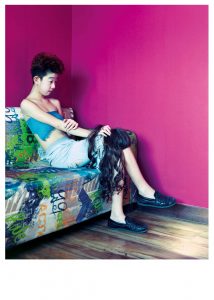 The new exhibition of the Alexander Tutsek-Stiftung will be on display under the title About Us: Young Photography from China from 4 June 2020 until 29 January 2021. The exhibition features seventy photographs of young Chinese artists that were acquired for the collection over the past two years. After Robert Rauschenberg’s western view of China in the last exhibition, these photographs now show interior views of the artists living in the country.

Their themes revolve around self-perception, subjective experiences, and everyday ways of living. They range from documentation of the explosive social change by way of critical perception of the new living conditions in the metropolises and in the countryside to attentiveness to its vanishing cultural heritage. Whether in quiet, black-and-white aesthetic suggestive of documentaries or as a dramatic presentation in color, they all tell of the artists’ own experiences: About Us.With themes such as memory and history, melancholy and resistance, dream and vision, body and individuality, they concern the search for one’s own identity. They are mirrors of ideas and fears, of isolation and lust for life, of curiosity and depression, of coolness and confusion of their authors.

A new generation of artists completely transformed their artistic production in the 1980s and 1990s after the Cultural Revolution in China ended. After Socialist Realism, ideology and propaganda, they developed new concepts and visual languages and a wealth of styles and techniques. The concept “experimental photography” attempts to sum up the complex and yet very different experimental and conceptual works produced from the 1990s to the present. Their diversity is also reflected in the selection of artists represented in the exhibition, several of whom are internationally renowned, while others are largely unknown outside of China.

This exhibition is intended as a contribution to the discourse on contemporary photography in China, a country that is increasingly a decisive political and economic power internationally, though its visual worlds are little known in the medium of photography in the Western world. These photographs, where their autobiographical narratives, subjective worlds of ideas, alternative models and visions offer insight into the individual complex emotional and experiential worlds of a generation of young artists who use photograph as their medium in diverse ways in their search for identity in the turbulences of a changing society.