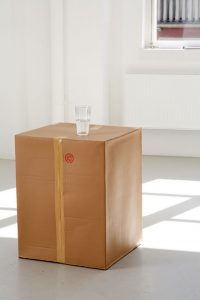 Tony Matelli’s first solo exhibition in San Francisco presents a series of highly produced, representational artworks using materials such as bronze, marble, and silicone. The end result is anything but traditional sculpture. Matelli’s artworks are lifelike, seductive, and beautifully wrong. His hyper realistic sculptures are often mistaken for the actual thing, undermining the viewer’s expectations of what they could or should see in an art institution.

The artwork selected for the exhibition creates a complicated experience. The viewer becomes invested and absorbed in the work allowing the narrative to expand the object and address neglect, social class, art history, as well as transformation. Tic Tac Toe, for example, is a dusty looking mirror adorned with finger traces across the surface that has been painstakingly crafted in layers of tinted urethane. Window is a darkly painted bronze sculpture cast from a cracked residential windowpane; both works are designed to confuse reflection and subvert subjective clarity. These artworks share a relationship with David Ireland’s Copper Window, circa 1978, where Ireland replaced a broken windowpane in the front Parlor Room of 500 Capp Street with a copper etching plate. Beneath the window is a cassette recording of the artist describing in great detail the view outside the window before it was covered. These works challenge the romantic idea of the window as a portal or symbol of the picturesque creating an obstacle or monolith rather than an opportunity.

Matelli’s sculptures create a disconcerting tension between uneasiness and humor, frequently suspending time and belief. The polyurethaned walls of 500 Capp Street become an ideal framework for this exhibition, an uncanny environment, echoing the past while caught in a state of contemporary conversation. Matelli’s sculpture Josh is the embodiment of this idea, enlightened yet completely collapsed. Josh is frozen—a ghost, untethered and free, floating adrift within the institution. He is a vessel, a shell, the house itself—Josh, much like Glass of Water, is literally half empty, half full. A hyper realistic sculpture of what appears to be a standard cardboard box and a glass of water, a lens through which to see total neutrality, a three-dimensional trompe l’oeil asking us to take a critical look at ourselves and the culture around us, a moment where one’s not sure what is fiction or reality—its perfect.

Additional exhibition information
The Garage at The David Ireland House presents Not the Apple but the Fall, an exhibition featuring Francis Alÿs, Fiona Connor, and Tony Labat.