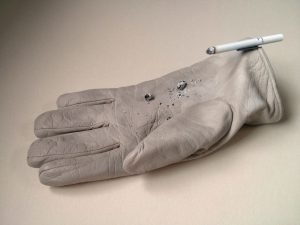 The 500 Capp Street Foundation is pleased to present TIMESHARE, a solo exhibition by Liz Magor. Featuring new and previously made work, this will be the Canadian artist’s first West Coast institutional solo exhibition.

For the exhibition TIMESHARE, Liz Magor occupies 500 Capp Street, as a short-term tenant. Her artwork bumps David Ireland’s material world out of position, pushes him aside, and does so without apology. Through a series of spatial considerations, Magor’s objects and arrangements flip-flop, provoking questions about beauty, uncertainty, confusion, digression, and doubt. Magor complicates this inquiry further by presenting no fixed answers; she would rather contradict one explanation, while offering the next. Her artworks exist in this ambiguous space where the unwillingness to settle on one meaning or voice is extremely valued.

At the entrance to Magor’s exhibition is One Bedroom Apartment, (1996-2019) a crowded grouping of furniture and household items clustered together, as if someone were moving in or out. As familiar as this setting appears, something is off. Searching through the objects for clarity, we locate a sculptural anchor: sheltered underneath a cluttered table is a dog, or the appearance of a dog, a white three dimensional object, lifelike, yet stylized. Magor offers us a moment of empathy, allowing representation to become more tranquil than real. One Bedroom Apartment, sets a transitional tone for the exhibition—the objects in One Bedroom Apartment are taken from 500 Capp Street itself—so, rooms within the house are bare, furniture is covered by moving blankets, turned backwards, or left askew. Deciphering where the art begins and ends becomes complicated. Magor has collapsed the interior of 500 Capp Street; is the inside going out, or is the outside coming in?

For the past four decades, Magor has been committed to a dialogue about our material world. Magor works subjectively and usually with objects that do not carry strong cultural or personal signifiers. Combining found objects with cast elements, Magor investigates issues of authenticity and representation, blurring the space between reality and simulation. Unpredictable, imaginative, and generous, there is a slowness to Magor’s work, an uncanniness celebrated by letting materials and associations reveal themselves over time.

In the Garage and on the terrace, the exhibition, Drag-Out by Swedish artist, Nina Canell, draws significant attention to the infrastructure of our built environment and its relationship to natural material deformation. A centerpiece to the exhibition, Energy Budget, (2017-18) is a video that juxtaposes a slow-moving leopard slug on an electrical switchboard with a series of large energy passages that have been built into housing complexes at Telegraph Bay, Hong Kong. By combining real-time motion with a pneumatic zoom lens, the video is caught in a hesitant symbiosis. The slow-moving and surreal undertones of the video are also experienced through a small group of sculptures installed on the Foundation’s terrace.