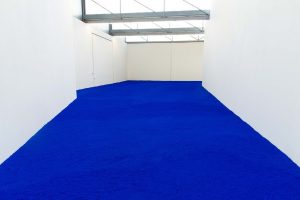 Created in 2014, the Venet Foundation is an exceptional art venue comprising over 5 hectares in the heart of Provence in the village of Le Muy. The Foundation is home to the conceptual and minimal art collection of Bernar Venet, one of the most important in the world, boasting works by the movements’ most renowned figures, including Donald Judd, Dan Flavin, Carl Andre, Sol LeWitt, Richard Long, Robert Morris, and Lawrence Weiner. The sculpture park features monumental pieces by major artists such as the Stella Chapelcreated for the site by Frank Stella (2014), and James Turrell’s Elliptic Ecliptic (installed in 2016). The Venet Foundation in Le Muy adds to this each summer with a special exhibition devoted to one particular artist and a new display of works by Bernar Venet.
From now on, the park hosts three new monumental sculptures by Bernar Venet, including Effondrement, presented at Versailles in 2011.

This year, the Venet Foundation is celebrating its 5th anniversary and taking part in the celebrations marking the 90th anniversary of Yves Klein’s birth with an exceptional summer show devoted to Yves Klein called Pure Pigment, a vast installation of pigments applied directly on the floor and covering 200 m2 of the Gallery of the foundation.

ABOUT THE SUMMER EXHIBITION
The French artist Yves Klein is a central figure of Nouveau réalisme (New Realism). Born in Nice, he continues to be celebrated in his home town. During his short life (1928-1962), Klein created a number of emblematic artworks, including the blue monochromes; IKB (International Klein Blue), the colour for which he filed a patent; the ‘Anthropometries’; the ‘Fire Paintings’; the ‘Void’; and his ‘Monotone-Silence Symphony’. In 1957, while showing paintings at Iris Clert’s gallery, Klein simultaneously held a separate exhibition at Colette Allendy’s called Pigment pur (Pure Pigment), featuring an installation by the same name made up solely of ultramarine blue pigments. Displayed horizontally, the original work stretched out before viewers’ eyes and at their feet, although they were not allowed to walk on it. The piece anticipated by nearly ten years Carl Andre’s sculptures and invented a new paradigm, the flat work of art that extends horizontally in space. Klein saw this show as his first step towards moving beyond the problematics of art.
Although reinstalled many times since, including at the Guggenheim in both New York and Bilbao, the Centre Pompidou, the Modern Art Museum in Fort Worth, the Hirschhorn Museum, and the Walker Art Center, this installation has never been displayed in anything like the dimensions that the Venet Foundation can devote to it.

The Venet Foundation is open on Thursdays and Fridays. Visits upon reservation at www.venetfoundation.org